When you apologize for being misunderstood, it makes those of us who don’t look bad.

p.s.  I should also point out that, in a way, such apologies only make sternly worded letters from me more likely.

We’re getting commuter rail.  I thought it might be fun, after Smiley went to the trouble of showing me the ins and outs of using the city bus, to return the favor by treating him to a ride on the about-to-be-launched Music City Star.

I thought we could take a fun ride out to Lebanon and wait around for a reasonable amount of time and hop the train back.

America, I don’t mean to slag on our commuter rail before it even opens, but I cannot take Smiley to Lebanon and fart around for a little bit and come on back to the big city.

No, if Smiley and I want to go to Lebanon, we have to spend six hours there.

Six hours in Lebanon?!  With me?

Come now.  I’m good fun, but not an hour commute each way and six hours of farting around fun.

But folks who come in from Lebanon?  They can get on a train twice a day that will bring them in, let them fart around for a little under an hour and head back out.

Also, in the realm of stupid, they don’t have trains that run during Titans games.

Anyway, I just had to complain.

Today is my mom’s birthday. 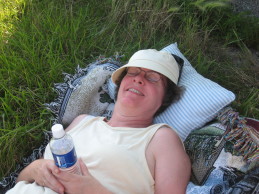 Her parents were told to come home from the war, get jobs, and start families for the good of the country. And considering the short time between the end of the war and the birth of my mom, my grandparents were no slackers in the patriotism department.

It turns out, I think, that those two things are the same. She feels incredibly connected to the world. She doesn’t mind catch-and-releasing wasps from bedroom windows. She’ll gladly spend an afternoon cleaning a stove or painting a mural on a school wall. If ladders need to be climbed, she’s up them. If folks need an ear for listening, she’s got one. If someone looks vaguely familiar in a Dairy Queen a hundred miles from home, she’ll go up to them and try to figure out how she knows them–thus leading to us mocking her forever by putting on our best mom voices and asking her “Are you my cousin?”
My mom is kind of scatter-brained and over-dramatic. But she’s a riot.

And she’s passionately devoted to small acts of resistance. Some, like her insistence on playing religious Christmas music for her students, drive me insane. I can’t get her to see how, as a public school teacher, she’s a representative of the State and thus should not be running around establishing a religion in her classroom. Maybe she does see. Maybe she just doesn’t give a shit.

But others, like her “Spanish Club” make me so proud I about can’t stand it. She teaches reading to developmentally disabled grade schoolers, but because of all you yahoos who believe that there should be no ESL stuff in schools because we live in America damn it and people need to speak English, a good two-thirds of the kids she sees aren’t developmentally disabled at all. They just don’t speak or read English very well.

Which means that my mom spends a great deal of time helping perfectly able kids learn English when she’s supposed to be spending all her time helping kids with learning disabilities. Your tax dollars at work.

Plus, she’s not allowed to speak Spanish to the kids, even though she’s learning on her own time, so where as, in Saneland, she would be able to say “water is the same as agua” and the kids would be all like “Oh, okay, I get that” and move on with their lives, she’s got to get all Anne Sullivan about it and take them to the sink and poor water over their hands and be all “water, water, water!” until they get it.

What breaks my heart is that the whole reason my mom has set out to learn Spanish at sixty years old is that there’s no adult in her school who is fluent enough to understand the kids or to make themselves understood in return. And my mom is afraid that, if there’s a tornado or a fire or some other disaster, and the children start to panic, there’s no one who can calm them down and give them instructions or who can understand if the kids are trying to say that someone is stuck in a closet or under some rubble.

And so she’s going to be that person.

Does the world really need hours of Mrs. Wigglebottom in two-minute increments? I say yes. The Butcher says no.

He also says I need to learn things like “framing” and “lighting.”

I wasn’t going to post this, because a dark brown dog on a dark green sofa without proper lighting equals a big black blob of nothing, but her sigh right in the middle of it is so cute I could not resist.

After this, though, I’ll not inflict my home movies on y’all.

I think we all know that this camera thing cannot last. So, I’m trying to capture everything I think might be remotely interesting to you, defining “remotely interesting” as “stuff you don’t have at your house.”Few of you have a dog like Mrs. Wigglebottom, I’d gather, and I’m willing to bet that none of you have this thing on your porch.

I don’t know what happened to this poor cactus. I don’t know if the fork is there for a reason or for some political commentary. This is what it’s like when you have an artiste in your house. You never know when something’s just a poor sickly plant and when it’s art.

Dear Reader, I leave it to you to judge. 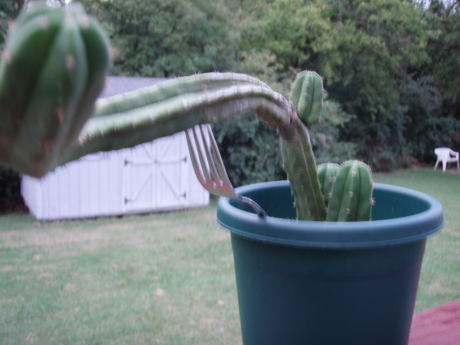