It’s not October without a weird woman chanting over a smoking cauldron and so I do my part to add a little magic to the neighborhood. The utiseta had to be early this year as I’m not going to have nine more consecutive nights at home after this week.

Here’s the altar and some shots of it in use. Note the turkey bone (ha!). 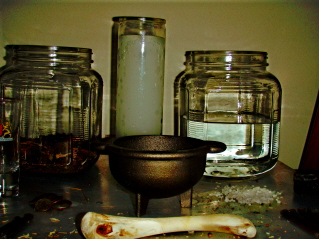 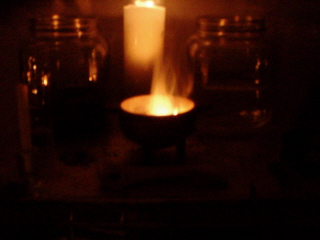 I had a professor back in college for “Women, Work, and Leisure” which looked at the social history of women from about 1880-1910.  We ended up spending a lot of time talking about immigrants into Chicago.  And our professor told us this story about how the women from Hull House would go into the ghettos along Maxwell Street and spend their days teaching the women how to clean their homes and cook nutritious meals.

And finally one woman said to them, “My only window opens into a chimney.  And I know how to cook eggs; I can’t afford them.”

Last night, the Professor and I were talking about whether there’s some line where you can say “This is helping; this is some kind of fucked up imperialism.”  This morning, in a fitting coincidence, brownfemipower was talking about the same thing.

I’ve read brownfemipower’s post a few times now as I tried to come up with something to say about it.  And what I want to write is just “No, no, no, no, no.  Fuck you, we’re helping.”

In other words, gentlemen, you will be amused to realize that I find myself in the same position I imagine many of you are often in when you read here, where you know in your heart you are well-meaning and trying to do the right thing, and you can’t believe someone would dare say that not only is your right thing not the right thing, it’s hateful and harmful towards the very people you believe you’re helping.

Look here, even to talk about how that post makes me feel, I have to revert to talking about some imagine ‘you.’

Because there are Muslim feminists living in Iraq and Afghanistan who could tell us, if we listened.

But even we have this deeply ingrained idea that, if we’re well-intentioned, what we’re doing helps.

What’s hard to hear is that it doesn’t.

I think, for white feminists, there’s two things at play here.  One, from a very small age, we’re taught to be good helpers, to not stand up and lead, but to stand to the side and anticipate what needs to be done in order for things to work smoothly, and do them without being asked and to do them in a way that’s invisible.  The other is that we’re a part of American culture.  We believe in the importance of outsider heroes who swoop in and do battle to save people in danger.  Our whole American mythology is rife with those outsider heroes.  Almost every story we tell has one.  And we believe it.

And so, you have two things going on here, I think.  One is feminists who are looking to figure out how to stand up and lead, but who have not even begun to do work on their ingrained belief that they should anticipate others’ needs and meet them without being asked which is colliding with our belief that it’s good and fine for outsiders to swoop in and save communities, again, without being asked.

Our whole idea of what doing good looks like very rarely takes into account whether our good deeds have been requested by the people we’re about to impose them on.

And it sure as fuck doesn’t take into account whether those deeds are actually good.

I will admit that my desire is to nit-pick brownfemipower’s post into oblivion.  It fucks so deeply with my sense of who I am as a feminist that I want to undermine it, because I can’t refute it head on.  What she says bothers me and makes me angry and hurts my feelings and I don’t like it and I really want her to take it back or say, “Oh, not you, B.  You’re okay.”

But I think she’s right.

And that stops me short.

Now, answer me this, did it not make you go both “Oh my god, how cute!” and “Mmm, barbecue.  I wonder if I have enough gas to get over to the Mothership?”

Knuck, slap an address and phone number at the bottom of that, and you’ve got you the best ad in town.