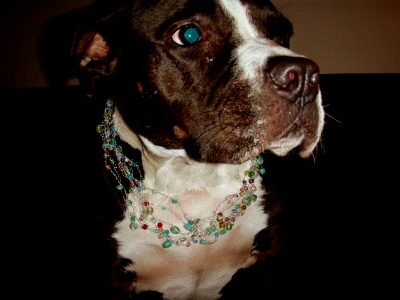 The Shill’s sister is an accomplished jewelry maker. While we were up there, she was parading around a stunning necklace of lacy metallic joy. I loved it. I even tried to discern how much it might cost for a girl to get one for herself, but to no avail.

So, what should arrive today?

I put it on Mrs. Wigglebottom in an effort to raise her spirits. You can see it didn’t exactly move her to good health. But at least she’s not making that noise any more.

And on an even cooler note, according to the brief message in with the necklace, the style has been named after me. It’s called the Theckla.

Oops. I spoke too soon. She’s making it again.

6 thoughts on “Looking Good, But Not Feeling Good”