As those of you who read Monosyllabic Pedantry know, Exador is often trying to find the one thing that will finally set feminism so far back that… well, I’m not sure what the result would be… we all die in childbirth after spurting out 18 kids only two of which make it to adulthood while our beloved husbands work in the coal mine until they die?

I don’t know, I’ve got no clear idea what the non-feminist world Exador is fighting for would look like, but, if you read him, you know he’s fighting for it.   Just the other day, he was arguing that we should repeal the 19th Amendment and today he sends me an email titled, “Another Step Back for Feminism.”

I mean, really.  Again, we feminists find ourselves in the role of Br’er Rabbit.  “Oh, no, dirty-homed men!  Please, don’t go calling someone and paying her to clean up after you so that we don’t have to do it!  No, no.  That will set feminism back at least 25, maybe thirty years.  Please, I’m begging you, don’t pick up that phone!”

I kid, but I can appreciate a man with a goal (though, in fairness, it seems he has two goals–one to defeat feminism and the other to reverse the Council of Trent) and so, in honor of him working towards his goals, I will share with him now the secret to truly combating feminism.

Naked pictures of you.  No, really, for every naked picture of you on the internet, two women turn their backs on feminism.

That’s all it takes.  Show us what you’ve got, big boy!

Today I was listening to Clapton’s “Crossroads” and I didn’t change the channel.  I don’t think that’s ever happened before.  I guess I’ve made my peace with him.

In part, I think it’s this.  Somehow, Eric Clapton remains a student of the blues.   Just for comparison, I looked up Jimmy Page and “student of the blues” and got nothing.  But do that search with Clapton and all kinds of things pop up, like this article from the New York Times.

Today in Salon.com, there’s an article about the writer and director of “Black Snake Moan” and he’s talking about the blues.  At the end, he says,

They don’t realize it’s true exorcism music. These men of the Delta
were not Uncle Toms. They were bad-asses in a time when you could get
hung from a tree for speaking your mind. They were the first to sing
about injustice and pain. And to sing about the injustice of the heart.

And maybe that’s the difference between Page and Clapton for me.  I believe that Page is, if not exorcising, at least wrestling with demons.  I still feel like Clapton is practicing for the time when he may be called on to do that work.

But in the end, I guess, I don’t see the crime in that.

I’m going to have to get out there with a better camera than just my cell phone and take you a picture of the interstate sign visible from our front yard. But this photo has its own funky charm, I think. 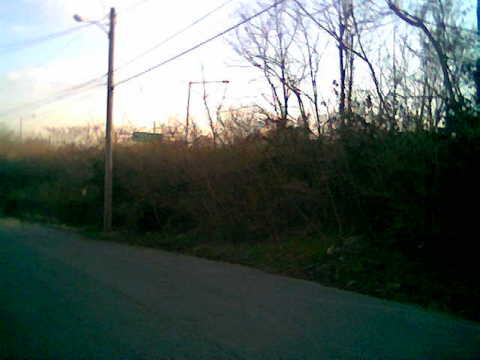 Y’all know how much I love the conservative soap opera.  Two installments today.

First, Terry Frank takes Carter to task for being an elitist.  Be sure to check the comments both places for a subtle strain of “My millionaire can beat up your millionaire.”

But second, Sarah Moore acts like a dink.  Coble calls her on it.  And Sarah Moore makes it worse.

Keep an eye out for the meat of Moore’s argument, which seems to be “Fat people don’t make me feel disgusted; they make me feel sad.  See, that’s totally different.  I’m not hostile; I’m patronizing.  And it’s okay to be patronizing; it shows you care.”

I had this weird brown itchy spot on my shoulder.  It was rough.  I planned on having the doctor look at it.

It just fell off.

I wonder if I’m asexually reproducing.

Right now, I shut my eyes and I’m laying in a hammock strung between two palm trees, listening to the Atlantic roll into the shore of San Juan.  I’m swaying back and forth in the slight breeze.

No one knows where I am and my phone is off.

I don’t speak Spanish, so I can’t understand any of the conversations going on around me.

And I’ve got nothing to do all day except lay here in the sun.

You know, pretty much the exact opposite of how my day has actually gone.