Here’s the view from my hotel room. 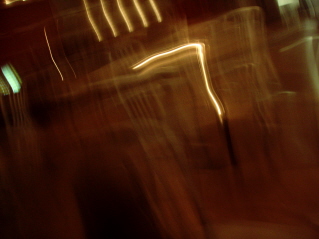 And here we are last night at the wine bar… 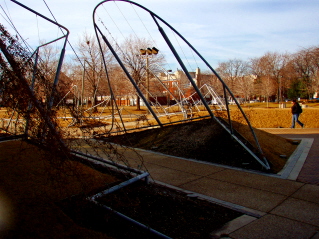 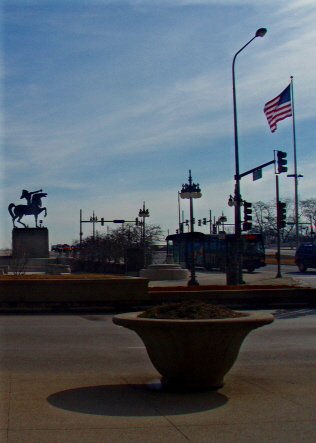 Is it just me or does that Native American appear to be shaking his fist at the American flag? 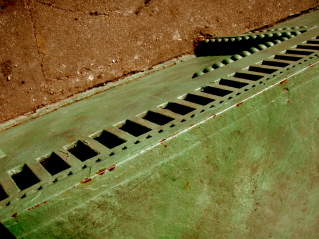 This is the bench I sat on at lunch.

And this is the awesome floor I stared at while I was waiting for my appointment.

I forgot to take a picture of the Church Secretary, but here’s the awesome shirt he gave me. I can only hope this means that some fireman is walking around Chicago right now bare-chested!

He is just as brilliant and thoughtful as you would imagine from his comments, but surprisingly not a college professor, though there’s something about his demeanor that suggests he might should consider it.

I don’t know.  It was just nice.  I feel invigorated and I have lots to think about.

I was a little star-struck.  I hope it wasn’t too obvious.

Just so you don’t have to go clicking back, here’s the post from that cutie Bob Krumm that made me have to put on my WTF?! Togs.

Just to get it out of the way, of course what West said was idiotic and shows, at the least, that he doesn’t get that “Latino” is just a term that means folks who come from or come from folks who come from Latin America, which is most of our hemisphere.  No, “Latinos” don’t have a unified and uniform understanding of themselves as one people nor do they all have the same shared history of oppression.  And no, they don’t all vote the same
Does that mean Krumm’s post raises a good point?

Let’s start with “I hear that attitude expressed from time to time. Usually it’s about women or blacks, and those who say it are trying to make the case that to vote for the GOP is to sell out your race or your sex.”

No, to vote for the GOP as a black person or a woman is not to sell out your race or sex; it’s about voting against your own best interest.  That’s why it makes no sense.  The GOP is notoriously full of racists and sexists and homophobes who refuse to acknowledge not only the full claims to citizenship of minorities, women, and gays but often even the basic humanity of us.

Just as I wouldn’t expect a Mexican-American to vote Democratic just because this Republican administration is busy rounding up the parents of U.S. citizens of Mexican descent.  But I would wonder why he would vote for a party that might come after him or his family.

And then you ask:

But if you disagree–if you are inclined to think that “real” women and “real” blacks, along with “real” Hispanics, should never vote Republican–I ask you to consider how you would respond to someone who uttered the sentiment contained in the headline of this post:

No real white man should ever vote Democrat.

No, I can get how it’d be wrong in that white men have a lot of good reasons to vote Democratic.  I mean, why is that sentence wrong to say?

If someone feels like the Democratic party is unfriendly to white men or advancing policies that are actively harmful to them, I think they’re ridiculous, but I don’t think it has to be inherently racist or sexist to say so.  I think it’s weird that you think it would be.

There are white men.  You, for instance, are a white man.  Are we supposed to pretend like we don’t notice?

I live for the day when “white man” is just another political group struggling to get its needs addressed by a diverse government instead of the race and gender of most everyone in charge.

As they say in wrestling, bring it on.

After lunch, before the Church Secretary gets here, we’ll be discussing this post by Bob Krumm.  I read things like this and it makes me wonder if Twisty has blaming shoes.  Like you know, she reads something and she realizes that she has to say something about it, so she takes off her regular shoes and puts on her blaming shoes?  Just to get her head in the right space?  Or maybe a blaming hat?

Anyway, at lunch, we will put on our WTF?! togs and ask together, Bob, wtf?!

It should be fun.

Hee, all of a sudden I feel a little like a professional wrestler.  “I’m coming for you, Krumm.  And I’m not waiting until Wrestlemania!  Only until lunch!”

Ha, let’s call this the least surprising post ever!