I had this brilliant idea to take Mrs. Wigglebottom down to the Bicentennial Fountain and photograph her playing in it for your amusement, but, alas, the fountain is closed.  So, instead, we went first to the old City Cemetery, which, folks, let’s talk plainly about.  That place is falling apart.  The Friends of the Cemetery are doing good work, but the amount of restoration and help it needs is clearly beyond what volunteers can do.

Look how beautiful this place is!  And they have doggy bags so that you can wander around there with your dog and enjoy how beautiful it is.  No, it’s not the safest part of town, but I think that, if more people were in and out of the cemetery, vandals would be dissuaded.

Mrs. Wigglebottom and I enjoyed a nice visit with some of the Fisk Jubilee Singers.  I asked Mrs. Wigglebottom where she thought Dr Jack Macon might be buried.  She’s pointing “in that general direction.”

After that, we decided to go check out the oldest African American cemetery in town, which is on Elm Hill Pike, just behind the Purity Dairy.  I told y’all how Zora Neale Hurston lived on Lafayette over by the City Cemetery?  Well, I took a picture of her block, or what I think was her block.

I assume it looked much, much different then.  So,we drove down this road and turned left at the Purity sign and then turned left into the Greenwood Cemetery, which is connected to the Mt. Ararat Cemetery, which is the cemetery we were most interested in.  We drove around some, but the only thing we saw of interest were these three graves here.

The one on the left is covered in white rocks.  I’ve seen that at the newer African American cemetery.  I’ve heard that that’s a throwback to African burial traditions, but this is a fairly new grave and I didn’t see any evidence of that on older graves (nor have I at slave gravesites here in Middle Tennessee), so I’m going to assume it’s a revival tradition and not an ongoing one.  The grave in the middle belongs to Baby Kenny, who was in his early twenties when he came to be here in the cemetery.  If you look closely, you can see the sparkley gold cone on his grave.  At the time, I didn’t notice it, but there’s clearly a third grave to the right of Baby Kenny, rest in peace.

While we were poking around, we noticed that this cemetery is enormous.  It crosses the road and goes clear back behind the Purity Milk plant.  Since we weren’t finding anything all that out of the ordinary in this part of the cemetery, we decided to go explore over there.

It says “No Trespassing” and so we pulled in and acted like we knew what we were doing.  Here’s Mrs. Wigglebottom leading the way. That’s Purity directly to her left and you can see the Batman Building straight ahead of her. I don’t know if you can get a sense of how large this cemetery is, but where the road curves up ahead of her is about halfway into the place and this is just the smaller, older part.  I really, really right about now wanted Bridgett or some other historian with me to explain what I was seeing. 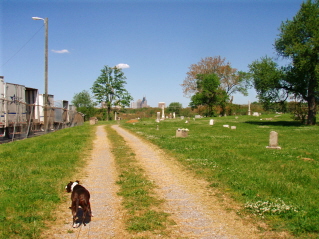 The quality of the graves ranged from great to shitty.   Old Rooney here represents about the middle of the road.  A nice stone, but not great quality writing.  Bridgett, take a look behind him.  See that pile of dirt?  They were all over this part of the cemetery.  I wonder if people are being dug up or if someone is using this as a dump or what.  I don’t think they’re fresh graves, just because they didn’t appear to respect the boundaries of what are clearly other graves.  Any ideas?

Two graves really caught my attention.  I’m not sure how well you can make this out, but check it.  Clearly, this is just a concrete slab someone wrote in and placed on this grave.

Someone with a better camera or better photo editing equipment could have really pulled that into legibility for you.  I’m not that person.  But check this anyway, and have your heart broken.

As they say, click to embiggen.  As best I can tell, it says

God damn, tears your heart right out, doesn’t it?  No wonder there are still flowers on that grave.  Who could hear about little Margaret and see those hand scrawled words, written, presumably, by a parent, and not want to mark her passing from the world?

And then check this.  I found this lying on the ground, but couldn’t make heads or tails of it. 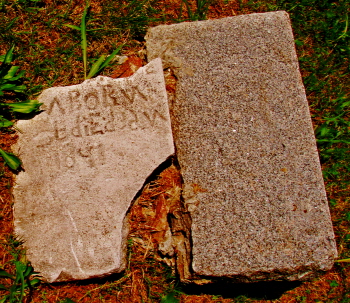 If 1841 is a death date, that makes it, by far, the oldest grave we saw all day.  It’d also be weird because I’m not sure how old Mount Ararat Cemetery is.  My understanding was that everyone who lived in Nashville, black or white, was buried in the City Cemetery until after the Civil War.  If 1841 is a death date, this grave would disprove that.  Unless, and this could be, Mount Ararat started out as the slave cemetery on whose-ever land this was and grew from there into a general African American cemetery once the white folks started finding it fashionable to be buried out at Mount Olivet (which, funny enough, is not that far from this cemetery.

Anyway, good fun.  And then the Professor and I had ice cream over at that place next to Beyond the Edge in East Nashville.  Holy shit is that good ice cream! And then we went and wandered through open houses and wondered just who the hell has all this money to be able to afford 250,000 to 500,000 dollar condos.

That depresses me a great deal.