I would like to catch my troubles, like lightning bugs, in a jar and keep them with me, but apart from me, pulling them out and looking at them, from behind the safety of glass.

I am tired and grossed out by how all of my brother’s games with my nephew revolve around real or pretend violence.  It’s more like watching two brothers than a father and son and my nephew talks a lot about the ass-whoopings he’ll dole out to my brother once he’s big enough.

Yesterday, they were all sitting around laughing about how my mom used to break wooden spoons on my brother’s butt and my nephew said how they hurt, but they hurt the worst when someone hits you in the knee cap or on the feet with them.

He’s also announced that he prefers to be beat with a thick belt rather than a thin belt because the thin belts hurt worse.

My dad was all “He was asking about what your grandfather was like and ha, ha, ha, what could I say that was honest without ruining it for him?  I said ‘He liked girls.'”

Someone’s whopping that kid with a belt and switches and spoons.  I cannot imagine he’s going to be surprised to learn that he comes from a long line of people who got the shit knocked out of them by the people who were supposed to be protecting them.

And, lord forgive me for saying this, but I completely see why the adults in his life think that violence is a good way to keep a kid in line–because they are dumb asses.

My nephew is a bright kid and they basically act like babysitters.

They don’t do anything to guide him and he’s already weird in that way that kids who raise themselves are–kind of sly and needlessly duplicitous and constantly on guard.

I’d like to say that I don’t know what to do, but the thing is I know exactly what to do and who it is who’s going to end up doing it.

And it pisses me off that people who have had this kind of shit done to them would turn around and do it to others.

But, what the fuck?  Let’s just buy him a bunch of stuff and that’ll make it all better.

Tonight, on the way to supper, the recalcitrant brother was all talking about how I was going to wait too long and not be able to have kids.  My dad chimed in with some story about how I should keep in mind that I could always adopt.

I have no words for how that made me feel–horrified and angry and deeply, deeply amused.

Yeah, let’s bring some more folks into this mess.

And I swear to god, I love you people, but the next person who tries to talk to me like I’m actually enjoying my parents’ visit is going to get impaled.

Y’all, they’re going to do nothing.  I feel in my heart that they’re going to do nothing.  I pray that I’m wrong, but I know them and I know their instinct, if they even think that something is wrong, is going to be to convince themselves that they’ll be able to help alleviate my nephews’ suffering once they get to Georgia.  And in the meantime… I don’t know.

Here’s what’s all the issue, as I see it.

The recalcitrant brother was in jail earlier this year for not paying child support for this nephew.  I have never witnessed it, but I’m sure he uses some level of physical discipline on my nephew.

If I call DCF and they do a thorough investigation, I can’t imagine anyone’s going to come out looking like a great parent.

My brother is still married to the self-medicating bipolar nightmare who is my sister-in-law, even though they haven’t lived together in half a decade and she’s has this boyfriend for nearly that long.  Since they aren’t involved with the judicial system in any way, they have their own custody arrangement worked out.  She has my youngest nephew whenever she wants him for as long as she wants him.

I already have told my brother that if I see any evidence ever again that she has laid a hand on my youngest nephew, I will call the authorities.  This has basically resulted in me not seeing him.  He’s supposed to be in kindergarten.  He’s not going, because she can’t get her act together enough to get him there.

It is imperative that my brother get custody of his youngest, even if that means the youngest has to sleep in the tub.

It pisses me off that my brother doesn’t feel the same level of urgency about this that I do, but there you go.  He is a stupid-ass parent.

And so, dear reader, you see the barrel I’m over.  My oldest nephew’s situation sucks, but, as far as I can tell, his life is not in imminent and constant danger.  My youngest nephew, however, is in circumstances I can’t allow myself to think too much about or I feel sick.  I don’t want to have it on record that my brother is a shitty parent, if that’s going to stand in the way of him getting the youngest nephew, should he ever decide to stop being a shitty parent and gain custody of the boy.

My family is fucked up and, if I make too overt a problem, they will decide that I just should not be told about things in the future.

So, I must figure out how to make my stand in such a way that I’m listened to instead of just written off as “bossy” or “unable to handle things” and how to make a threat I can carry out without feeling like I’ve just cut off one nephew’s escape route in order to help the other.

But other than that, it’s been a great visit.

You’ll be semi-shocked to learn that the second I put my mom to work helping me dye yarn, the boys had a mysterious, pressing play-date at the park. 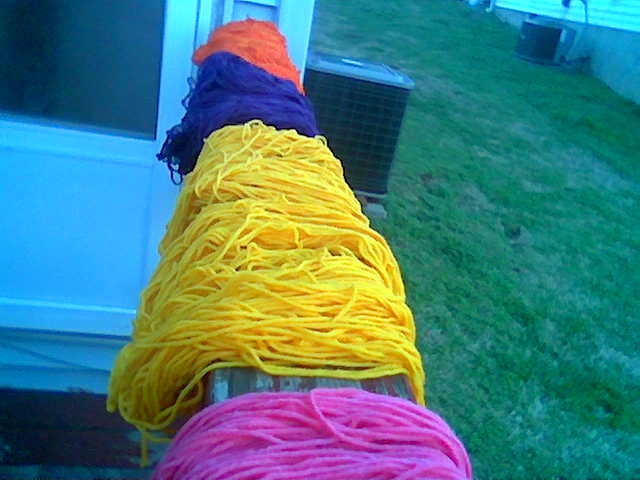 My computer is old.  I’ll admit.  But why is it that I can read my emails but not send any?  If you weren’t going to work on a computer, wouldn’t you just not work completely instead of torturing me with emails I can’t return or send?

This is tickling me so much I can’t even tell you.  Let me mull it over a little and get back to you after the folks are gone.

Absolutely.  We must go check out the place behind Purity.

In response to your Christmas card, I just wanted to say that what I’ve always appreciated about you is your willingness to tolerate people’s weirdness.  It put me at ease.

To my Present-Sending Midwestern Reader,

The Butcher actually got the box out of the mailbox and then left it on the table under some other crap.  I finally found it and opened it, and much to his chagrin at the moment, it was not a box of SARS.

Hurray, and thanks.  The tiny shampoo was a delightful touch.

So, we’ll all be there about three, okay?