When I don’t pay attention, I feel pretty good about the Democrats and this election.  We have two interesting and compelling candidates, both of whom have devoted and excited bases.  And it seems like, no matter who we end up with as a candidate, it’s going to be pretty okay.

I just wanted it to be different.

I know that’s naive, but these past eight years have been a heart-hurting, Constitution-shredding mess, and I really want to see something different.  I want to see candidates engage in civil debates.  I want to see liberals make reasoned and informed votes, but then get behind whoever becomes the eventual nominee.

Because we’re going to have to work together after this is all over.  We still live in a conservative state, where our basic citizenship is under constant threat.

We know and have known for ages that the people in power need us to be too busy fighting with each other to turn our attention to them.  And yet, here we are, bickering over whose turn it is to be president, who has suffered the longest, who deserves it more.

Am I alone in thinking, “Fuck that shit.  I’ll vote for a black man this time and a white woman next time and a brown woman after that (or whatever other confligration they give me).”  I mean, truly, what’s with this notion that this is it, this is our shot, as if this will be our only shot?

Have we really been fighting only for us?

Because I didn’t get that message, that I was working for the day when a woman could be president, but that, if it didn’t happen in my lifetime, my cause is a failure.

And, honestly, and I’m not trying to rain on anyone’s parade, but come on.  I’m not working for a day when the rich puppet of corporate interests who sits in the White House looks like me.  That, to me, will be a pleasant symbolic gesture, but it isn’t my end goal.

Yes, it’s true, the Appalachians are full of quaint little hollers filled with deformed blind witches and inbred abnormalities due to all the incest.  And what’s even scarier is that they don’t have the cable tv or the internet or radios or even phonographs.  Why, they don’t even know there’s an outside world, except when some Hollywood beauty comes through to be summarily either worshipped or defiled or eaten or some combination of the three.

Why, I remember when Bill Monroe first came to town.  They had to put him out on the Opry stage three days early just to let him acclimate and even then, he’d be interupting his songs to beat his wife or fuck his cousin or get drunk on the moonshine.  Don’t even get me started on Earl Scruggs.  That man still calls all the guys he sees “Son” and all the girls he sees “Darlin'” because he’s in awe and confused by all the different names in the world.

I, myself, just to be safe, carry a stick so that I can protect myself from all the hillbillies ’round these parts.  I’ll beat a hillbilly.  Shoot, I’ll beat a Bill or a William just to be on the safe side. 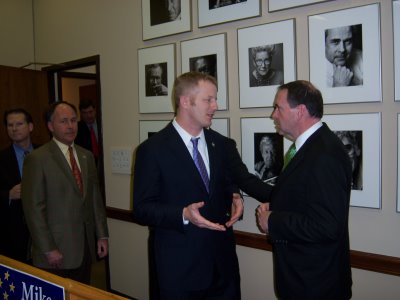 Maybe the authorities think that they’re supposed to keep Bicentennial Park free for crime, not free from crime.

3.  And for Jag, especially, some bad-ass barooing.

Did you ever see a TV show so bad that you thought, “Who in the world is stupid enough to watch this shit?”

I feel that way about Paranormal State and yet, I must tell you, America, it’s me.  I’m watching it.

I don’t know why.

If you have a problem with ghosts in your house, you would literally be better off to do exactly the opposite of everything they do on that show–and yet (or maybe because of that) I cannot turn away.

Last night’s episode saw them wandering around a haunted old insane asylum with a dude who had what they call a “Frank’s Box” which was some kind of radio receiver that supposedly fed the signal back in on itself and through which they could hear the voices of the dead.

No!  Don’t think too hard about how a radio might produce voices.  Argh.  It’s too late, isn’t it?  You thought about it.

First, because the demon stopped the Frank’s Box from working, and, really, ten minutes of static and playing “pretend we all heard audible complete phrases out of that noise” was more than even I can take and I’m not a minion of Hell.  Second, because it brought that Warren woman and any time she shows up I get the giggles.  If she walked in to just one place and said, “Nope, not feeling a single evil thing,” I think I would faint in surprise.

But, most importantly, the demon possessed the Christian medium…

But I also think that it’s pretty clear that the Bible frowns on consulting with spirits.  And so, if you’re going to call yourself a “Christian Medium,” you’ve got a little theological problem.  I think there are ways around it.  You might, for instance, believe that it’s okay to open yourself up to messages from the dead, especially to help them achieve some goal they can’t rest without achieving (so being a psychic detective might be okay).  And you might draw the line a little closer, saying that you accept messages that kind of find you, but you don’t put yourself in situations in which you are looking for those messages.

And, hell, maybe you even just go for being a Christian who consorts with the dead.  But, if you’re going to do that, I kind of want to know how you came to the understanding that it was okay.

Of course, no hint of that from Chip, the Christian Medium on Paranormal State.

Oh, the demon.  Yes, so the demon possesses Chip and then, in what is clearly the highlight of the season so far, the demon/Chip yells “fuck you” at the director dude, who doesn’t even flinch, and then the Warren chick slaps Chip!

Okay, it wasn’t high drama, but it was certainly the best thing to happen on this show.

And then, I thought they were going to get all of the investigators together to “raise a cone of power” or some such other almost Golden Dawn nonsense, but it turned out that everyone just had to sit around and watch Director Dude, Chip, and Warren “open a vortex” so that the spirits could pass through.  That amounted to them holding hands and demanding that the spirits basically have the balls enough to leave.  Because nothing says “Go into the light, go to a better place.  Escape the demon that’s tormenting you and ascend into Heaven.” like open hostility.

I swear, that show’s motto should be “The Least Amount of Good with the Most Amount of Idiocy.”