I have this terrible habit of calling my friends and asking their opinion about something and then getting pissed when they give it to me.

So, I’m all mad at Mack because I called him up for advice on buying a house and he gave it to me and it involved shit that bothers me and so I’ve been sitting around all night “Well, fuck that; he doesn’t know,” like I’m fourteen.

The thing that irritates me is that I never made any other plans.  I was going to go to college, find a husband, get married, have some kids and spend my days bitching about doing the dishes.  So, just like now, but totally different.

And for the most part, I’m glad things didn’t work out that way, because, frankly, I like difficult men and I, myself, am the kind of person who sits around and gets pissed when people do what I ask them and I don’t guess I believe that I could ever be happily married.  I reckon this, in part, because I’m always delightfully surprised when I find married couples that still like each other–like it’s a hen’s tooth or something.  This isn’t because happy marriages are all that uncommon, I don’t think; it’s just that I never thought one for myself was possible.

So, yeah, that’s fucked up.  But it is what it is.  And, like I said, I’m happy that my life is how it is and I’m very happy that I didn’t just settle for who would have me, with the expectation that I should just be happy someone would put up with me, no matter how shitty the match was.

But what I didn’t do, and what I still don’t do, is make other plans.  Okay, so I’m not getting married to someone I don’t really like and living in a little town where he drinks too much and I sit on the phone complaining to my friends about what an idiot he is.  I’m not devoting my life to my kids, because I don’t even have kids.

And, frankly, in general, I don’t know.

I think it’s a theological problem.  Of all the things I can’t let go of, it’s hardest for me to let go of the idea that there’s some plan, that all this stuff happens for a reason, leading to some great purpose, and if only we could get enough perspective, we would see it.

There is no plan.  There’s just me, who needs to suck it up and get on with it.

And it’s also a feminist problem, really.  I cannot quite let go of this idea that my goal in life should be to be someone’s perfect match–to not get too entangled in a happy single life, so that it won’t be too messy for me to give things up to incorporate myself into being a wife.

Though I think those two things go hand in hand; that they reinforce each other.  I feel like I’ve been trained, since I was very, very little, to think of my primary job in life as being a good wife and so everything that I might want to do, no matter how cool, is just a way to burn time while I’m waiting to be chosen, which will then prove my worth as a person.

It’s hard to admit that to myself out loud because I hate it and, if any one of my friends spouted such nonsense, I would spend the next three hours lecturing them about what bullshit it was.

I can recognize it as bullshit.

But, if we think of each woman as a bonzai person, contained and kept as a kind of simulacrum of full people that don’t actually exist, what I’m saying to you is that this is the shape of my roots; barely deep enough to nourish me, but the shape I’ve been given my whole life.

At some level, maybe, feminism is about realizing that–that you are root-bound–and working towards putting seeds and shoots in free soil.

But this is the shape I take.

And what I want to tell you is that I’m afraid of trying a new shape on my own.

Even though I know it’s stupid, it’s so hard for me to do what I want to do just for me.  Sometimes, I can trick myself into doing things by convincing myself that they’re for the Butcher or for my parents.  Sometimes, I can impose on others to do some of the stuff for me.

But this house stuff, I need to do that for me.  And I can’t quite figure out how to go about it.  Not the outward stuff.  But whatever it is in me.

But articulating that makes me feel better.

p.s.  Come on, Missouri, why isn’t your state tourism slogan “Missouri loves company”?  It’s so good I can’t believe I’m the first person to think of it.

Hey, look what came via email. 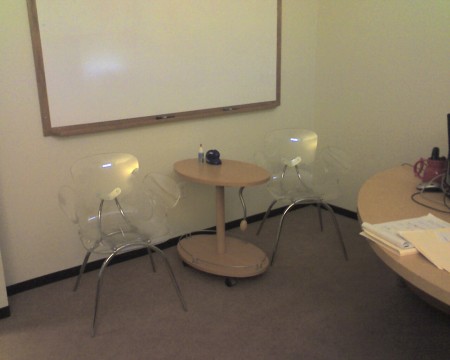 I wonder if they make see-through yarn… I could totally whip my friend up a see-through afghan to go with his see-through chairs.

1.  If I ever need to give someone a look of any sort, I’m totally hiring Katie’s baby to do it.  Take a look at these pictures.  We have “I will tear your head off,” “Um, maybe you shouldn’t wear that in public,” “Is that Lee Greenwood or Ray Stevens?” and “Let us never speak of this again.”  I could make good use of any one of those looks.

3.  One last Google Street Map view.  If you lived at the old zoo, you, too, might have a bear cave in your front yard.

Oh, I forgot to tell you why we were at the Presbyterian church.  So, see, as you know, there’s not really a “Battle of Nashville” historic battlefield of any sort, because we put houses on it.

But the city (or maybe the state, I forget) has been given this tract of land, with a house and some outbuildings and a couple fields, which is a big swath of land in town that is just how it was back when the battle was fought.

And I just wanted to get a look at it.  Se we went to the church next door.

But it was pretty overgrown and there wasn’t really any good way to get a look at it.

But I want to see it!  How can I make this happen?

Nashville, I spend a lot of time, when I can, driving aimlessly around our city looking at things and then mulling them over.  It’s my way.

And yesterday, as I was attempting to ascertain how Timothy Demonbreun got into his little cave home and looking at just the gross-ass litter I had to drive through a bunch of non-river related industry to see, it dawned on me that we have this beautiful feature of our landscape that we treat little better than a sewer.

In general, we’ve lined it with industry and chosen to live elsewhere.

In the past, this made sense.  The river was, first and foremost, the equivalent of an interstate–full of traffic and noise and things that need to be moved from one place to another.  I live right next to the interstate and I can tell you, every morning, when I’m out walking the dog, I’m thinking “Should I be breathing this?”  So, I can understand why prior Nashvillians were not that eager to look at the river from their homes.

And it’s hard for me to imagine a day when future Nashvillians will sit in their houses and say to their friends “Why aren’t there more houses along the interstate?  Who wouldn’t want to stare at those twinkling lights all day?  It’s so beautiful.”  But what the hell?  It could happen.

My point is that I don’t understand why, with all the growth in Nashville, we’re expanding ever outwards instead of evicting the non-river-related commercial stuff from along the river and growing there.

In general, sports teams do not generate much, if any, local economic impact …. The reason is simple. Sports teams, and especially those in leagues that play weekday evening games, attract insufficient “new money” into an area to overcome the large leakages created by players and owners who live outside the local area during the off-season and spend a large portion of their income elsewhere