So, after a disasterous raid on the First National Bank of Northfield, Minnesota, Frank and Jesse James escaped to Tennessee.  Jesse settled in Nashville, over in Edgefield.

Frank, though, settled in White’s Creek:

I didn’t arrive at Nashville until July, 1876. I think I went directly then from Nashville out into what is known as the White’s Creek neighborhood. The first place I went to there was the widow Harriet Ledbetter’s, who lives over on White’s Creek. In the meantime I rented a farm, which, however, I could not get possession of until January 1, 1878. I remained at Mrs. Ledbetter’s during that fall. I put in a crop of wheat and moved there and lived in the place known as the Jesse Walton place. I lived on this place one year, that was up to 1878. Next year I rented a place from Felix Smith, on White’s Creek also, but nearer to White’s Creek than the place I have just mentioned.  I remained there a year, and made a crop in the meantime–a general crop, as farmers raise–corn, oats and wheat. The next year I lived on what is known as the Jeff Hyde place, on Hyde’s Ferry, about three and a half miles from Nashville. I remained there a year. During that year I didn’t farm any. I was working for the Indiana Lumber Company. That I think was in 1879.

I’m deeply pleased by this because I’ve spent many years here at this place asking people if they wanted to visit the Phillips Family Memorial Civil War Battle Field and then taking them out onto my back porch and pointing at the train tracks. 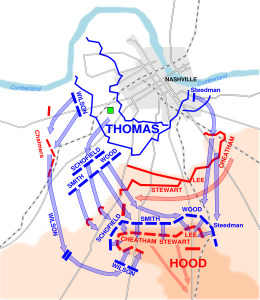 The green marking where we are.

And I probably found that much more amusing than any of my guests.

But, now that I know the chances are good (fingers crossed) that we’ll be moving to Frank James’s stomping grounds, I’ll still have something to motion vaguely to when people come to visit us!

OH NO!  I just looked up Whites Creek on Wikipedia and learned that fucking JOHN RICH is going to be my neighbor!  America, I’m leaving this neighborhood in part to escape him.  This is not funny.

I’ll just say it: They’re coming to take The Pill away.

There should be no political support for this and yet, if we can’t raise enough of a ruckus in the next 30 days, it will become public policy.

See here, here, and here (among others, but these were the ones in my feed reader just now).

These two posts were back to back in my RSS reader.  Here and here.

I am, of course, a pinko liberal commie but I have to admit that, as much as I believe our nation’s health care system needs to be drastically overhauled, I read stories sometimes that remind me how enormous the pitfalls are if we’re not careful in instituting reforms.

Alabama’s fat-hunt is one of them.  That the state of Alabama should arbitrarily decide that fat people should unilaterally pay more for health insurance than nonfat people while using the BMI to decide what constitutes fat is hilarious.

I cannot wait for the first lawsuit in which someone argues that they are more healthy as their nonfat co-worker (which would be entirely possible if “fat”-by-BMI-standards co-worker were an athlete) and yet charged more for health insurance.  That’s blatant discrimination, there.

I missed the fucking doctor’s call because I was on the phone trying to get some mortgage shit straight with my dad.

I’m about to cry.

Since Feel Good Fridays are not searchable, I don’t know if someone has brought this up already, but even if so, it won’t hurt you to dance around to it again.

I was just watching the “Sedona Surprises” video from McCain’s daughter.  I don’t know if you’ve seen it, but I am shook.  I guess because I’m a naive asshole.

It’s not on par with Katrina, and I don’t mean to suggest that it is, but it sounds to me a similar tone (though, obviously, much less devistatingly).  The thing I took away from Katrina, that I cannot get over, that I cannot let go of, that I cannot forget long enough to ever settle back into the same mindset I had before it hit, is that we are on our own out here–we cannot depend on our government to save us and, in fact, our government can and does turn its back on us, knowing that the rest of the country will come to believe that we have somehow brought this abandonment on ourselves.

Watching the McCain video, watching the “press” corps going to John McCain’s ranch and eating his food and sitting in his big comfy chairs and getting drunk and swinging in his fucking tire swing and laughing away like they’re all best buddies.  I mean fucking Politico buying Cindy McCain flowers?

While the rest of the country struggles to pay for food and gas and their houses, while manufacturing jobs dry up, while we’re playing “Shall we or shan’t we fight Russia?” and while we’re out here trying to get enough information to make sound judgments about who should run our country, you’re busy playing “Picnic with Our Next President”?!

Fuck you, you fucking fucks.

I watched this whole thing, all the footage of the press corps who are supposed to be my eyes and ears on the campaign trail instead playing party time with the popular kids and I about wanted to vomit.  If this is what the MSM does, then good riddance.

It just pissed me off.  i mean, it’s one of those things you know is true, but to see it there in front of you, repeatable on YouTube over and over and over again is just galling.  Is there no professional decorum at all?

So, yeah, it’s a good thing we have the internet, so you can find stuff out for yourself.  Because it’s not like you can trust these people to bring you the truth.

Fine, yes, I’ll stick it below the fold for all you babies.

Sorry babies with an RSS reader.  You’d better just hope your eyes don’t skip too far down before you finish reading these sentences that tell you we’re about to deal with <quietvoice>girly stuff</quietvoice>.