The bank is sending “the package” to the title company.  We should close Wednesday.  Which tickles me.  For obvious reasons.  Wednes.  Hee. 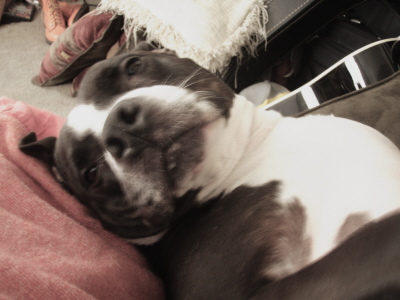 Wipe your feet before you come in, make yourself at home, and don’t mess with the dog.  She doesn’t take kindly to being shooed off the couch.

Actual conversation I had just ten minutes ago.  I’m at the copier.  The new intern is at the computer.

She: Do you have a blog?

Holy shit!  How cool is that?

I really think this is an interesting choice.  On my way to lunch, the guy behind me was on the phone and he was all “I don’t understand it either, but I’m sure there’s a reason.  I hope there’s a reason.”  I think there are a couple of reasons.  One, at least from where I’m sitting, she seems like a with-it, interesting, firecracker.  Do you think aids are going to have to (or even be able to) take Palin’s cell phone away from her to keep her off message?  Do you think she has any hesitancy at all about using the internet?  And the picture of her over at Uncle’s?  With the gun?  Fucking hot.  And she effectively ends the ANWAR drilling issue, I think.  If she says we should do it, that carries weight.

I also think it’s interesting that election marks the end of a long line of Southern administrations.  No matter who wins, there won’t be a Southerner among them.

The interesting thing to me, though, is that she doesn’t seem to be a political insider.  And she seems to be kind of a bad-ass.  And while it’s true that it’s probably what McCain’s candidacy needs, I do wonder if it’s what McCain’s administration wants.  She doesn’t seem like the type to play Washington games (though I could be wrong).  She very well may be the maverick McCain wishes he were.

None of this would make me vote for her.  I’m not voting for someone so anti-choice and the national Republicans lost my vote for at least a generation with their response to Katrina.

But, if they win, I will be rooting for her to cause as much trouble as she can.

Though it’s not often directly referenced, one of the things that’s always held over the heads of people who want social justice is Reconstruction.  Just think back to Nina Simone singing “Mississippi, Goddamn” when she talks about “people keep saying, ‘go slow.'”

But the story we’ve been told is that Reconstruction failed because black people were failures at governing.  Not just failures, but completely unready.  No, more than that, not just unready, but incapable of ever being ready.

Take a look at this cartoon: 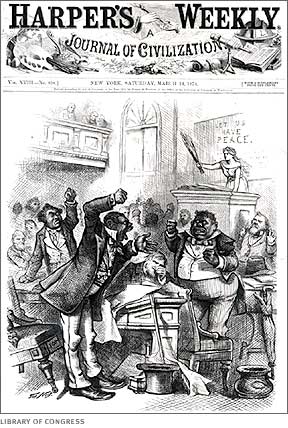 You don’t have to be a great cultural theorist to see how this cartoon works.  The black people are drawn with thick dark lines while the white people are drawn with thin lines.  The white folks look like drawings of white people, but the black images are more clearly caricatures.  And the point is clearly that these central figures are a joke, that they can’t really govern, because they’re just “aping” leadership and governing, not actually leading.  I mean, look at how they’re drawn.  Not only aren’t they politicians; they’re only almost human.

In the shower this morning, it got me thinking of the Uncanny Valley.  This is a… thing… they talk about in video game development, how the more something looks human the more humans respond positively to it–up to a point.  Then, after that point, if something looks almost human, but not quite, we have a very negative reaction to it.  This also, clearly, is one of the reasons we find certain kinds of robots and sex toys kind of viscerally repulsive.

In general, though, I’ve only ever heard people talk about the Uncanny Valley in terms of things moving closer to resembling humans and what happens when they become almost human.

But it seems to me that there might be very, very fertile ground for thinking about how that applies when the movement is the other way–from human into the Uncanny Valley, when we move people from the status of “human” to “almost, but not quite human.”  The more I think about this, the more I think there’s something to understanding how images such as the one above or other types of racial and ethnic characterizations work.

Look at the image again and look at how the tallest black dude is portrayed.  You could read it as suggestive of him being monkey like, with the shape of his mouth and the arm raised above his head.  But I think that the reason it worked/maybe still works to repulse the intended white audience is that it portrays him as something that is not human coming too close to being mistaken for human.

I don’t know.  I’m going to have to give this some more thought, but for me, it starts to put some pieces in place.  If people can come to believe that a group is almost, but not quite human, they will feel a gut revulsion towards that group and the terrible treatment of that group seems justified and natural.

Anyway, it got me thinking that these portrayals of black politicians from the Reconstruction era still shape at some level our ideas about black politicians and our notions of needing to go slow, to take our time, to not try for too much, less it backfire on us, are a direct result of our common understanding of Reconstruction.  And the Uncanny Valley.

I don’t know what to make of all that.  But it seems to me important.

On the other hand, I’m glad to see the Post letting you do some real analysis.  That’s nice.