I found dying this batch of yarn to be even easier than the first batch and so I thought I’d show you how it’s done. 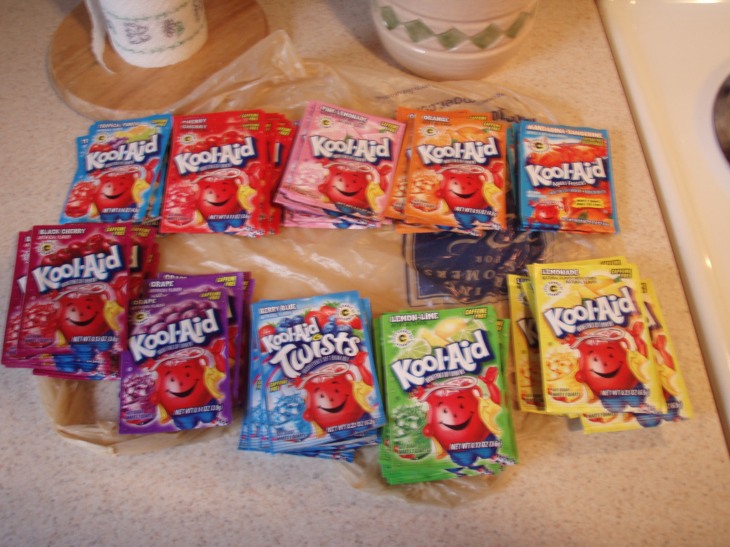 Procure some Kool-aid.  Be aware that the tropical punch Kool-aid is not blue; the blue packaged Kool-aid twist is the blue Kool-aid.  And the two oranges are the same color, so you just need to choose one.

Procure some 100% wool yarn and untwist the skein.  Then make sure both ends are tied (that’s what the pink yarn is for).

Now, here’s the tricky part.  You’re going to be putting wool yarn in hot water and, because of that, you’re running the danger of felting.  So, ALWAYS add your yarn to the hot water and do not move it around more than necessary.  So, obviously, fill your sink with water as hot as you can stand, and put your yarn in it.  Let it sit for fifteen or twenty minutes. 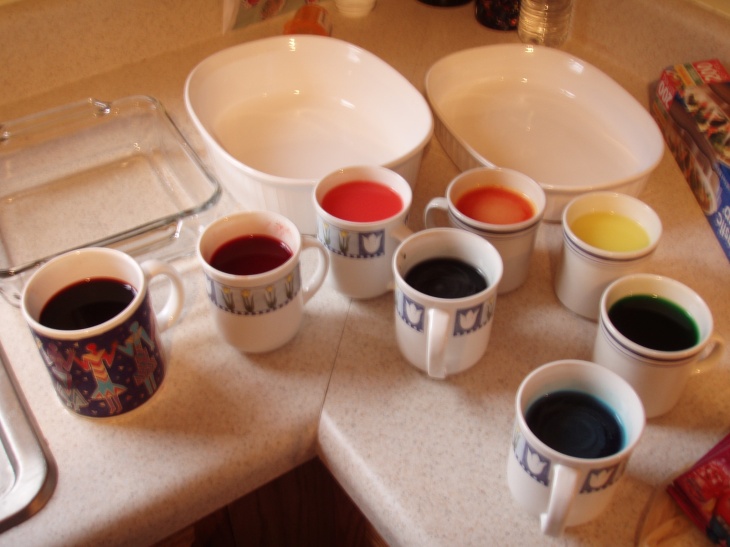 Meanwhile, put three packets of the same color Kool-aid into a cup of warm water to make some liquid dye.  Note the microwave-friendly containers behind the mugs.  For the dying stage, you want to keep things as wet as possible.  So, next curl up one (or two) skeins in each container and… 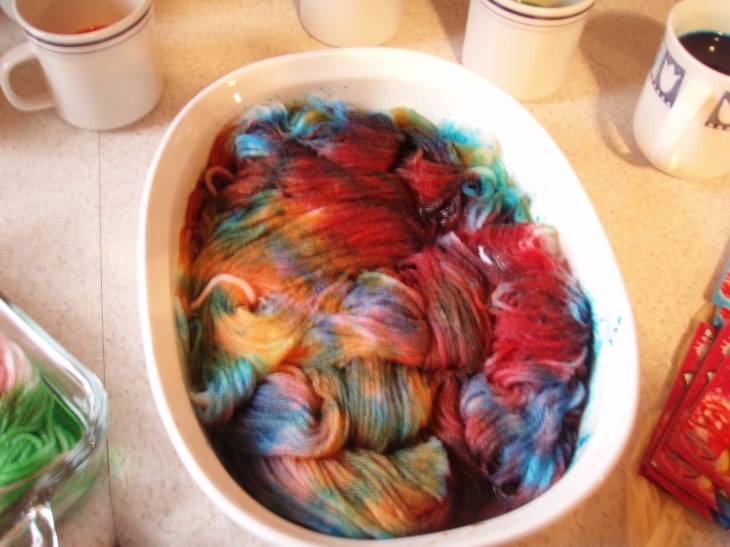 Pour on your Kool-aid.  You can also sprinkle on color as the inspiration strikes you.  Keep in mind that, like traditional tie-dying, you’ll have a lot of white on the parts where the Kool-aid can’t reach.

Do up another batch as well.  Cover both with plastic wrap.  Put one in the microwave for two minutes.  When it’s done, take it out and let it rest and put the other one in.  In a good microwave, each batch should only take two two-minute cycles.  You’re looking to see if the water is now clear.  Once it is, your stuff is dyed. 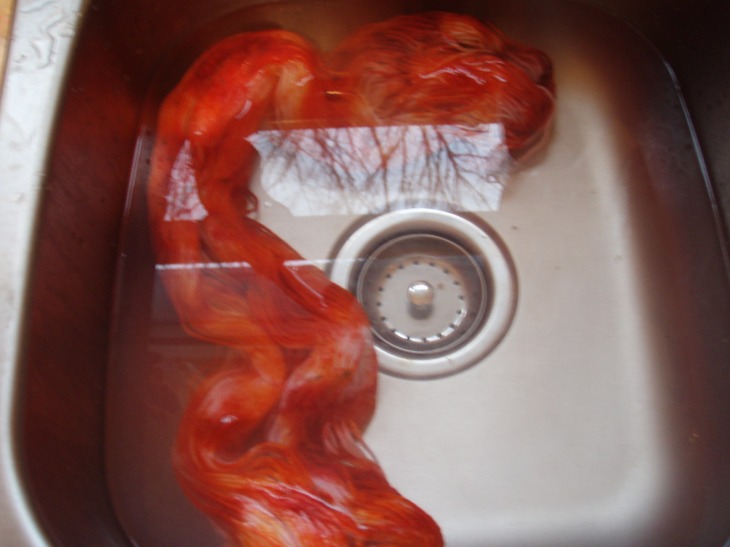 Now, you’re going to fill up the other side of your sink with hot water and dump your yarn into it to get rid of any excess Kool-aid that might still be on the yarn.

Then you’re just going to hang them outside to dry.

Which may involve twisting your ankle on the root of the damn hackberry tree.  In that case, you may have to go to more creative lengths to dry your yarn.

I’m sure the gals over at Home Ec 101 would tell you that the first rule of cooking is to create something nutritious and delicious for the folks you are serving.

If I ever write a cookbook, mark my words, I’m making that rule number one.  It’s especially important if you’re only feeding yourself, because if you kill yourself with your own cooking, there’s no one to call an ambulance.

I mention all this only to report that the homemade chicken soup I made for lunch (and will happily again eat for dinner) was fabulous.

One bag of frozen vegetables

One can of corn

One bag of black beans and rice

A dash of every seasoning in the cupboard

A couple of boullion cubes for flavor

Cook until you get done raking leaves onto your flowerbeds.  Eat.  Knock yourself over with how good and simple it was.  Ponder why we even rake leaves.  Decide, fuck it, even if we are all going to lose our jobs and have to move in with our parents…

Oh, hey, my parents rent!  I could still keep my house by having my parents move in with me!  Oh, heavenly day.

Oh, yes, even if we all are going to lose our jobs and have our parents move in with us to pay the bills, a girl is still going to need her own Kool-aid afghan and so, Merry Christmas to me, I’m going yarn shopping.

On the one hand, you have the folks spending all their money and effort on pushing that English-only crap (I have decided that their position can be boiled down to “We’re totally not racist, we just don’t like the foreign people we live with or who visit here.”).

On the other hand, last night the congregation of Our Lady of Guadalupe found out that their debt has been paid off and that they are a self-sustaining, independent congregation in their diocese.

Both things make me weepy if I think about them for too long, but the second makes me all Christmasy inside.  I will never understand how folks can feel anything but enriched by the diversity of our community.

I was howling with laughter when I read that the head of Thomas Nelson has stopped paying attention to financial news, because it’s making him kind of sick to his stomach all the time.  I mean, how sad that he’s a little sick to his stomach when so many of his ex-employees are without jobs right before the holidays.

But now I feel bad for laughing, because the Professor called me last night to tell me all about folks who, like me, must have thought their jobs were pretty damn secure, who found out Thursday that they weren’t.

We’ve already been scraping by for longer than I care to think about on just my income.  I have no idea what we would do if we lost that.  Part of me is all like, “Of course I’m going to lose my job.  I’m taking too much pleasure in this great house.  Too much unbridled happiness is always met with comeuppance.”  And I try to remind that part of me that such a worldview is pretty fucked up and that a person ought to be able to enjoy a little something without feeling bad about it or being punished for it.

So, I don’t know.  I’m pretty positive there are things before us that will go, if times get that rough, but this is the first time I’ve felt like, “Wow, it could be me,” and what would I do?  I’m not sure I have useful skills.

My dad is all excited because he believes that God will provide.  I’m annoyed by this, of course, because I’ve spent so much of my life being pissed off that God would as so much of my dad and in return let the kind of hearbreak he’s had visit him as strongly as it has, like God wasn’t living up to His end of the bargain.  And now my dad’s all convinced that the terms of the bargain have been met, hallelujah, start preaching to the recalcitrant daughter.

And you know, I sat there on the phone wondering if it was true.  And then a mischevious voice in my ear asked, “What if it took you doing what you do to get the Old Fart to come through?”

And I laughed, because, who the hell knows?

In doing this geneology stuff, I’m struck by the constant feeling that everything you know about your family is true and untrue in equal measures.  My grandpa, Hildreth Heistand Phillips, for instance, given at birth three last names.  And I easily found the Heistands, once I had the spelling right, but I found no more Phillipses than Hick’s grandpa Oscar (and grandma Mary) and no Hildreths.

Of course, I have heard all the stories about the two deaf-mute great grand howevermanys back there, but always as being on the Heistand side of the family, as an explanation for why my grandpa’s mom was so abusive.

But I’m digging through old census records to see if I can find anything about Oscar Phillips (I’ve had good luck finding branches of families by reading down the whole census page and seeing who lives right near by that has the same last name) and I find Oscar and Mary listed living next to Alfred Phillips and his family and Charles Phillips and his family and there, next to both Oscar and Mary, it says “deaf/mute.”

And playing a hunch I start searching for Mary E. Hildreth with my Mary’s birthdate, born in Ohio, and in short order, I’ve found her, in Ohio, listed also as deaf/mute, living with her parents and then, same parents, living in Michigan, in the same township she would later live in as Mary Phillips with Oscar.

So, there’s the last last name I needed to make my grandpa’s name make sense.  And there’s the proof that it wasn’t on the Heistand side that this happened, so, if my great grandma had some anger issues, it wasn’t the fault of her deaf/mute parents, because they were not.

Of course, in talking to my dad, he claims that Oscar wasn’t mute anyway, that he went deaf from scarlet fever he came down with in his late teens or early twenties, so he spoke just fine.

I don’t know where I was going with all this.  In my mind, it seemed to be connected, but looking back on it, I’m not sure it is.