1.  How can the same person who pronounces Pulaski “pew-lass-key” pronounce Buchanan “Buck-cannon”?

2.  Do you remember when seed companies used to give away two different baseball caps?  How the caps for women had a poofy ball on top?  Do they still make those?

An inscape plan?  A break-in?  Hogan’s Heros for the feline set?

I don’t know what you’d call it, but we have it.  Here’s the problem.  Since the neighbors’ break in, we’ve been keeping the door from the garage to the outside shut and locked at night.  Which means that, when some brat… er, cat wants to go out first thing in the morning, and insists on going out into the garage, even though the front door would lead him to the actual outside, he is then trapped in the garage.  Which, after he has deposited some footprints on my windshield right where I will need to see to drive, ceases to be amusing.

So, he wants back in. 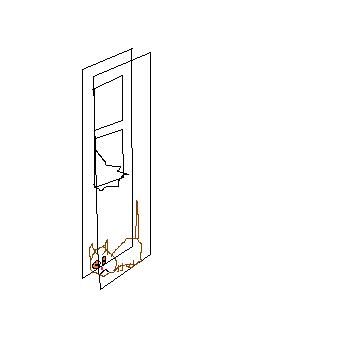 Luckily for him, the tiny cat starts launching dog food all over the kitchen, making such a huge racket that I have to come investigate, before the dog figures out what she’s doing and gets upset.  And folks, as a side note, I know it’s poor manners for a dog to bark and chase off the cats when she’s eating, but they do shit like this to her food all the time!  It’s not like a little food aggression is unwarrented.  They are constantly fucking with her food and, when they think no one’s looking, they eat it.

Anyway, so I rescued the orange cat, but then!  Then he ran back to the Butcher’s room and was all “meow meow meow” like he was tattling on me!  Like somehow it was my fault that he got stuck between the doors after his little take-down of the screen.

I couldn’t believe that little fucker totally narc-ed on me for something I didn’t do.

God.  Yesterday I was determined to make “Fowler” into a word that meant “lying in a way that is demonstrably untrue but expecting folks to just take your word for it because you have balls the size of Australia,” and today, I totally think that cat tried to Fowler about me to the Butcher.

Anyway, my point is that they clearly want some way to continue to force us to open doors for them to let them out (they seem to enjoy that) but for those doors to just remain open until they come back in.

And by “they” I mean that brat the orange cat.

Why is it that, in my mind, Kid Rock can do no wrong and John Rich can do no right?  Are they not two sides of the same coin?