I’m sure you can see why the Butcher was so moved.

Go ahead.  Guess.  Who was the Butcher watching TV with?

It walked up to him in the yard and he… I don’t know… took it as a sign that the crawdad wanted to watch some Attack of the Show.

I made him put it back in the creek.

I was thinking about how our church used to put together these Christmas packages for folks who were in hard economic straits.  It’d be a turkey and cans of vegetables and stuffing and some kind of dessert and a present for each of the kids, so that no matter how rough a year it was, people could have Christmas dinner and something to open on Christmas day.  The list of people we did this for went beyond people who were “poor” but also included people who were just “having a rough spot.”  So, it wasn’t anything to load up a box that you then delivered to one of your friends.  And maybe this was because this was an old coal mining community with a lot of folks who then worked for Comm Ed or Caterpillar but it was understood that there wasn’t anything shameful about “having a rough spot” because anyone might get injured or laid-off and not be able to work.  There was always a sense of “and next year, you might be handing a similar box to me.”

Did that make us all working class?  I don’t know.  That was the best school system I ever went to and, if I hadn’t gone there for two years of high school, I would have been screwed in college.  As it was, I entered college a bright woman with, basically, two years of high school education.  But I came from parents who’d been to college and at least three of my grandparents attended college.  But I still got to college and felt for sure like being smart wasn’t enough, that I didn’t have fundamental and necessary cultural experiences.  I mean, people, I had never been on a plane until I was twenty-five.  The recalcitrant brother never has.  My international travel is Canada.

Anyway, I was reading this piece over at Inside Higher Ed (which I’m linking to in hopes you don’t have to be a subscriber to see it) which is an interview with Kenneth Oldfield and Richard Greggory Johnson about their new book about queer and working class academics.  And this part rang especially true for me (I’m quoting it at length, because I’m not sure if the link is going to work):

A second illustration involves the unbefitting feeling I get when I hear non-WCAs discussing how as youngsters they vacationed at the beach with their parents, shopped for the right college, or are helping their children increase their odds of being accepted at the right university (i.e. preparing them to get high scores on standardized entrance examinations and building a strong high school resume by participating in formally recognized and so called important extracurricular activities, including, among others, plays, the debate team, the tennis team, and doing volunteer work). Why don’t more university admissions committees extend the same level of recognition and respect to applicants who worked at fast food restaurants or gas stations during high school? In the education game, it helps considerably if your parents know how to “play college.”

A third class bias is one that I only fully appreciated after I finished my doctorate. It involves the information I wasn’t given in all my years of schooling, or received only in passing, as if it were not that important. Most of my formal education about class involved omissions, which still seems the case in too much of higher education. I was never encouraged to appreciate how much America is a class-based society and, therefore, the profound role class and class origins play in determining favorable life outcomes, including recognizing the strong relationship between family income and standardized test scores (ACT and SAT, for example), the number and condition of teeth you carry into adulthood, longevity, whether you smoke cigarettes, how much you travel outside your region or country, how many books your parents made available to you during your youth, whether and where you attended college, and so on, ad nausea.

And that first paragraph especially rang so true to me.  My parents certainly didn’t know how to play college and I certainly had little idea how to or even of the importance of participating in things other than going to school.  Shoot, when I consider that, I about can’t believe I even got in.  And then I feel a little strange because maybe I got in precicely because there was something about my application that said “here’s a bright girl who hasn’t had a lot of opportunities.”  I mean, my parents have done some crappy things, but they worked hard to give us a knowledge of the world, as much of it as they could.

I don’t know.  When I think about the thing I learned from my parents that has affected my life most profoundly is that they taught me, no matter what happens to you, you just have to find a way to take it.  This has, single-handedly, been the most damaging thing they’ve ever taught me, but I know it comes from a place of truth and love–that life is going to be hard and there will be forces beyond your control that line up against you and there won’t be anything you can do about it, and taking a stand will only draw attention to yourself and attention from authorities always goes wrong, so you just have to learn to take it, to find a way to survive and move on in spite of it.

And in my life, a lot of things have happened, both to me and around me, and my first instinct is never to speak up, but to just find a way to take it.  It’s one of the reasons that blogging has been, for me, so important–it allows me to speak up, to practice being the kind of person who doesn’t just take it.  But it means undoing a lot of conditioning.  Ha, not just me, but the seven people in this chair before me (to go back to Oldfield and Johnson).  Taking it is how we got by in the world, how we survived.  It is, frankly, the way of my people.

So, it doesn’t surprise me to see the Ghost of Midwesterners Past advocating that we just figure out a way to take it, with “it” in this case being torture.

What became of it? Nothing. Absolutely nothing.

With new torture revelations coming by the day, we’re now on that path again. The left will yap about justice. The right will carp about weakening our national security. K Street lawyers will go orgasmic with new heights of billable hours. And in the end, perhaps five or eight years from now, some low-level schmuck will plead out to a few misdemeanors, while the guys who ordered the torture will walk.

You know it’s gonna go this way, because it always goes this way. So can’t we use all that time and money for something more useful, like building some kids a really nice baseball field? I’d be in favor of that.

Don’t get me wrong.  I sympathize with this position with all my heart, or else I wouldn’t recognize it for what it is–that same old Midwestern strategy of just learning how to take it.

But I can’t help feel like we’ve been trained to engage with the world this way not for our own benefit, but to make things easier for the people who have power over us.  And it’s hard to realize that, because it looks like survival, but in the end, it feels like eating other people’s shit and pretending it’s okay.

Eh, I don’t know.  I don’t really have a point, as always with these kinds of posts, but I still want to wrestle with this shit anyway.

Just got this in my inbox:

“With 20/20 hindsight it was not my best decision to ask Bill Freeman to serve as Party treasurer. “

It takes real guts to speak frankly about your poor decisions and to do so quickly and with seeming transparency.

Still not giving money to these yahoos, but it’s nice to see.  Other folks could take a lesson.

Wasn’t it just last week I was joking about needing that army of gay men to follow Lowe Finney around and clap and cheer when he acts like a Democrat and cough loudly and attempt to wave him off when he gets too far right?

And who just was made Senate Democratic Caucus chair?

The world is moving faster than my ability to accrue an army of gay men to do my bidding.  It’s not that I haven’t had volunteers.  It’s just that I have no way to provide them with provisions while they’re on my campaigns. Curses, foiled again by poverty! 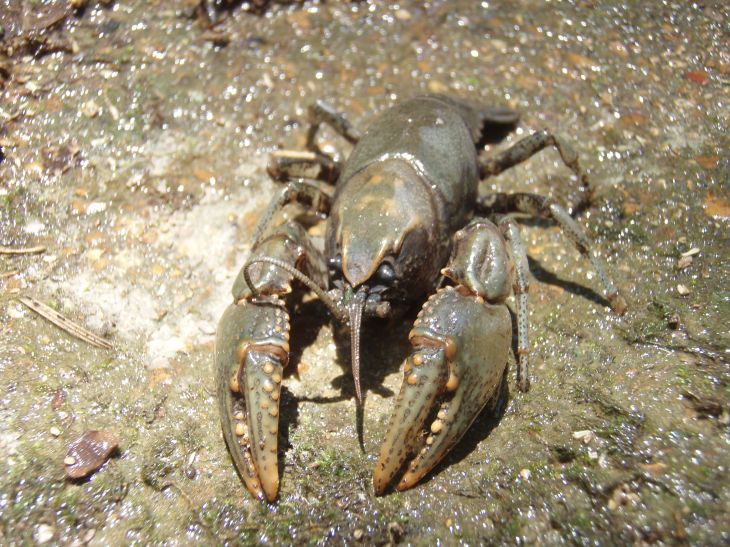 Judging by the number of “What is that thing?  Are you trying to give me nightmares?” emails I received, I thought it was an appropriate moment to consider the lowly crawdad.  Here’s what I know about crawdads–no matter how much you might intellectually know that a tiny lobster-like thing can live in your yard, it is always startling to see them; people use them as bait; and people eat them.  They are also known as crayfish.

Why this one was wandering around the yard?  Who knows?  But, hopefully, he will find a spot in the creek more to his liking and eventually make his way down to Dry Fork Creek, which has water in it year-round, where as our creek does not.

I always think it’s informative to listen to a bunch of different takes on a song, especially when you have four really different genres, like here.  It’s like, because everyone knows what the base song is, you can listen for what each artist brings to it, for the distinctions.  There is no “that’s not how the song goes” because these are all how the song goes.

I don’t know.  It’s one of those things that makes me feel like this is the possibility of America, each of us doing our own thing, learning from each other, then doing something new.  Over and over and over again.

There’s some weird ugly thing in the creek.  What should we do with it?  Leave it or eat it or fish with it or sing about it.

It just makes me feel like, yeah, that’s right.