So, I am slowly working through the fall gardening, leaving the biggest mess for last, but number three on my list of ridiculous things that have gotten completely out of control, was the front flowerbed where the little tree that had all the caterpillars in it this spring is. It had been washed over in a flood this summer, so everything I planted in it had washed away and all that remained were a handful of ancient irises from before my time. And big areas of soil were missing and some really clay-y dirt had been washed into the bed.

And then some privet babies had taken it over and I had just given up all hope of ever bringing back any semblance of sanity to it.

Until today, when I weeded the whole thing and dug up the ancient irises and set them aside to be put back after I was done with my trip to Bates, where I picked up some topsoil and brought it home to fill back in the bed and amend the crappy stuff that had washed into it.  I also went and dug up the three of nm’s irises that survived in the other bed (which is number one on my list or ridiculous things that have gotten completely out of control). And I bought some crocus bulbs at Bates because they’ve having this great sale (and folks, now is the time to plant bulbs; it’s also a great time to plant perennial flowers, like coneflowers and black-eyed susans, which they still have).

So, the soil was brought up to snuff and the irises went back in the ground and the crocuses were also strewn in the bed and now I can cross that off my to-do list.

Thanks, Mom, for making me feel confident about my iris-dealing-with abilities.

I guess on a side note I should say that my doctor’s visit went fine. There is nothing else wrong with me on top of the PCOS and he’s happy with how the metformin seems to me working and I should continue to try to lose weight, but that was the extent of that discussion.  I did show him the remains of my giant rash, which I was working on the last time I went to see him, and I said I didn’t think it was connected, but if I had been more insistent 10 years ago about informing doctors of the things that were wrong instead of just taking their word that I was fat and just not trying hard enough, they might have caught the PCOS then. So, I showed him where it was all healing up.

And he looked at it, on my arm and all under my boob and said, “Yeah, I, too, don’t think it’s anything, but it’s not that hard for me to imagine how an endocrine problem could cause this, so let’s just run another blood test to be sure.”

So, it was great. And, in honor of being “more” active, I am going to tackle one of the beds that got flooded this summer. 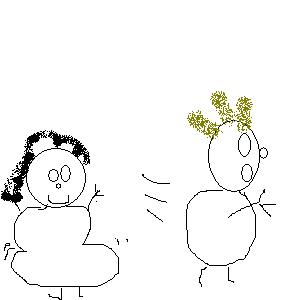 did not make out with, but totally would have, if they would have but asked (I also kicked Kleinheider’s butt and then shook my butt at him in a friendly, but taunting manner, after which, he hid outside on the porch. Bah.).

Ha, sorry, I got so distracted by how much fun I was having drawing this historically accurate artistic representation of what happened between me and Kleinheider, I almost forgot to get back to my main point.

So, we’re standing around talking about books and they’re talking about how 6,000 copies for a piece of literary fiction is not a bad sales number.

And I guess I knew that was true, but to hear someone who knows say it?

And it’s not that I think 6,000 copies is some small amount. But, if you figure a dollar a book in royalties, how does $6,000 mean anything in the face of the amount of work that kind of writing takes? It’s not just that writing fiction is a skill, but it’s also then a luxury. You have to have some means by which you have a lot of free time and no dependence on that as a steady income.

And shoot, no wonder authors and publishing houses were/are so caught up in Oprah.

And I’m constantly amazed by the disparate communities, even within our own community, that know nothing of each other. I don’t quite know how to articulate that, but six thousand people could read a book that no one else has ever even heard of and that book has done okay. Not great, but okay. Even though only six thousand people have read it.

I know that, between this, Pith, and my guest stint at Feministe, I’ve had more than 6,000 people read me. Shoot, more people than that probably read me over at Pith in a day.

I don’t know. My thoughts are jumbled but I wonder about the future of publishing. It’s funny because people are always complaining about writers on the internet giving it away for free.

But really, in the vast scheme of “trying to put food on the table,” how is $6,000 for years of work not pretty much the same as “giving it away for free”?