But good for Bill O’Reilly. Seriously. 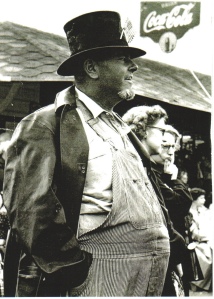 This is my dad’s uncle Harry, my grandma’s brother. I’m guessing this had to be taken in the early 60s or late 50s, just looking at the women in the background. I love how he looks like a guy I would know now–overalls, goofy chin hair, cool hat, mischievous grin, and long duster.

The weirdest part, for me, looking at that picture is that that is my dad’s ear. I would recognize it anywhere. And there it is, stuck on the head of a dude I don’t know and who otherwise doesn’t really look like the members of my family I do know.

I have to dig out the pictures I have of him in grade school, because I’m remembering that same grin.

Harold’s middle name was Eugene, but his brother’s name was (and I am not even kidding you, history buffs) Stanley Taft Robinson. He was born in 1910, so I’m going to assume he was really named after President Taft.

That tickles me so much. But I am shocked to learn that my Aunt Vada is indeed really my aunt. I always thought that my Grandma was the youngest and that Vada was her neice, Floyd’s daughter. But no, though Floyd had kids my Grandma’s age, Vada is indeed her sister (and Auntie Vi her sister-in-law).

This Obesity Task Force thing is giving me almost “going to a new doctor” levels of anxiety. I wrote a post about it over at Pith and I kept waking up last night thinking, “there’s still time to call Jim Ridley and beg him not to run it.” But what would be the point?

Honestly, I think I still believe that, if I just keep my head down and go along, I will at least get a pass as not like those other fat people. They may be disgusting, but I have an excuse. And not only is that a bullshit, unfair place to live in your own head, it’s just not true. No one who looks at me doesn’t see that I’m fat. And no one who looks at me who doesn’t know me and who thinks I’m disgusting gives a shit about whether I’m fat for a good reason.

It’s funny. I can write about all kinds of intimate things without giving it a second thought, but when it comes to talking about the shape of my body, the whole thing makes me want to throw up.

I’m still thinking about how it’s a member of the Obesity Task Force, a guy I really like and respect, who told me I should read the report that contains that image you see in the post below this. He sent that report knowing that I’m obese. And knowing that image is in there.

Do I think he meant for it to cause me to wonder if he fucking hated me? No. I think that, because he’s taken on this “problem” as his “problem” and it’s not something that directly affects him, he didn’t even consider that picture. To him, it’s just an illustration that, generally, says “Obesity is kind of gross, we need to do something about it.”

He didn’t even think about how I would see that as something that means that he thinks that I and the people I love who look like that are gross, that we are some kind of disappointment to evolution, how we even look stupider and more disgusting than regular people, and how we’re silly and obsessed with food.

At least, that’s what I tell myself, because I can’t stand to think that a guy I like would take joy in rubbing it in my face that he thinks I’m disgusting.

How much clearer could they be that these are their unexamined assumptions about obese people?

And I want to sit here and be like “Whatever, idiots. Your loss if my fat ass prevents you from getting to know me.” and then move on with my day.

But they’re running a state-wide initiative.

And their art and words could not be clearer about their assumptions about obese people. I mean, that art shows us as literally stupid and frivolous.

I don’t want to say anything. I find it painful and more anxiety-producing than anything else going on right now.

And they may not even listen to me. Or it may just reaffirm to them that obese people have to be dealt with like a public menace because we just refuse to get with the program.

But I feel like I can’t just sit here and say nothing, either.