I find myself tuning in at 7:55, hoping I can will the show to start earlier. Ha.

A Snoop Dogg tribute to Sookie Stackhouse?! Are we all on drugs? Or is that a real thing?

Oh, Bill, I love that you’re all snarky about Cooter.

Dang, the King is very mean and hilarious. And kind of badass. I thought the whole royalty crap was a little cheesy, but this is definitely going better than I’d hoped for.

Off-kilter Erik is kind of intriguing.

So, these vampires can see themselves in mirrors.

You know, I really like Tara and Lafayette’s relationship, not just because they’re awesome actors, but because people have cousins and cousins they are close to and yet, you rarely see that on tv.

I also feel like Hoyt and Jessica are really good portrayals of young love, with all the violence and the heartache, or at least, that’s how I remember it.

Shoot, Sam’s brother is pretty good at this acting crap, too.

“God killed him, because he a faggot, but he keep coming back.” Already, this part is breaking my heart.

Yep, “there’s some darkness in this family.” They are sisters. That’s a really nice touch.

Sam, of course you didn’t imagine you had a brother. That’s difficult enough. But imagining a brother with such shitty sideburns? Who could do that?

The stripping off and revealing the scars is straight out of the version of Huck Finn we had to watch in grade school. And I am pleased with the pit bull appearance.

Oh my. Bill has gotten so much more interesting now that he’s been kidnapped. And weirdly hot.

Jason Stackhouse: Prettier than most girls.

And someone with hot boots has just walked into Bill’s house.

And found his file on Sookie!

Is Sookie smart enough to have put silver bullets in her gun? Oh, it’s Erik.

I do, though! King of Mississippi, I need to say everything I’m thinking. At least, about this show.

I would like to think that this show will end with Terry being the only sane one.

Terry has an armadillo that sleeps under his bed! I hope he doesn’t get scabies or whatever. Don’t they carry something? Rickets? Someone tell me.

Ooo. The new vampire is the one with the sexy boots!

I wish Andy Belfleur had someone to smooch.

Or Kenya will end up being the only sane one. I forget. Is Kenya related in with Tara and Lafayette?

Nothing says “I’m happy to see my ex” like lighting her on fire, I guess.

That wasn’t that exciting of a cliff-hanger. I don’t even believe Sookie had silver bullets.

But normally the court intrigue isn’t that intriguing to me, but I’m kind of fascinated by it this season.

I can’t decide if this video is terrible or awesome. It’s both. I don’t understand what the brownhaired chic is there for. Hmmm. Well.

Okay, so obviously, they needed to separate Sookie and Bill if only to give Bill something to do that was sexy and intriguing. I also expect, after all this nonsense, for Bill to be one of the signers of some kind of Vampire Declaration of Independence. These monarch seem unhinged.

I’m intrigued by the new vampire and his sexy boots.

And I kind of hope Sookie does throw herself into fucking all these hot dudes. She’s too young to settle down with Bill.

I get such joy watching these actors, though. It feels like they’re really having a good time. It’s kind of a treat to watch them just taking this cheesy ass crap and making something kind of compelling out of it.

The Professor and I went over to the Farmhouse at Fontanel, which is a new restaurant run by the people who do the Loveless Cafe. I was more enthusiastic about it than she was, but I think that’s just because I have a higher crap tolerance as proven by the fact that I am eating frozen taquitos from a box this evening, topped off with some fudge striped cookies while she is, I’m willing to bet, eating something that has not been made on an assembly line by a machine.

Plus, I’d really like to have a restaurant that close to my house that has good service and isn’t overwhelmed with live music.

I got the BBQ sandwich with mashed potatoes. The barbecue was wet, which is weird for Tennessee. We usually favor dry rubs with sauces of various heat presented on the table (or counter) for you to apply yourself. Still, fine. I thought it was delicious, but I like Manwich flavor. So, um, yes, you should not make your barbecue taste exactly like Manwich flavoring, I think.

But then, I thought, maybe when you’re trying to give tourists from all over the country something to eat? Maybe you do. Let them acquire a taste for how the locals eat it someplace else.

I don’t know. But it’s kind of an interested problem.

The other problem they have is that, on our side of town, for locals, they are in direct competition with Southern Bred. And The Farmhouse’s mashed potatoes sucked. I mean, sucked. Like the potatoes they used were just bad tasting and then, whatever they were trying to do to them after that? It didn’t help.

But, I don’t know. I like a restaurant there and I like seeing people working and the service is great.

So, I’m going to go back and get something else and see what I think. 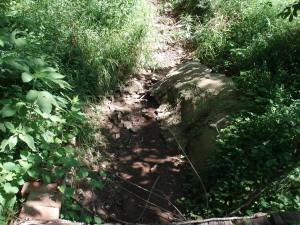 In spite of just living through the wettest May on record and being in the middle of a pretty wet June, my creek is dry. I find this annoying, that someone upstream can just shut off our creek whenever he gets a mind to (and he seems to usually get a mind to about the beginning of June). But it really pisses me off this year, because, if he had closed his dam or whatever on the Saturday of the flood, who knows how differently Sunday would have gone?

It seems to me that, if you want to be able to stop a creek from flowing when it suits you, regardless of the wishes of people downstream, you might act neighborly to them about stopping it when they need it to stop.

And I’d like to kick the person who gave this person permission to stop my creek. I mean, you can’t just dam up a creek without a permit, right?

Granted, I would cheat on Moss Wright Park with Lock One Park all the time, but still, I love this park.

1. Tom Humphrey’s post about how all this “Washington’s wasteful ways” bullshit so popular among local politicians neglects to take into account that the only reason our state budget is balanced is because of Federal money. There is more federal money in our state budget than state money. Regardless of your political party, I think that should be disturbing to you. We’re not paying our own way. The Federal government is paying our way (and by extension, the whole nation) and yet we have the gall to talk about giving Washington the boot? Or meeting them at the border with guns?

2. This story about what’s going on in Nashville’s domestic violence unit is also something everyone should read and think about.

So, yeah, Father’s Day. My dad is in Arizona on a trip that has some meaning for him I can’t quite understand. He is, I think, slowly coming to terms with the fact that he can’t save his grand kids and my brother won’t.

The church down the street from me has a sign that says “Happy Father’s Day. God made man in his own image.” Every time I drive by that sign, I want to go into that church and put my finger right into the chest of that minister and say “That’s a lie that hurts you.” Unless we assume that God was staring in His reflection in a puddle of water and reached through said reflection in order to grab the mud that made Adam. If men are just mud that has been shaped in water bearing the reflection of God, I can kind of accept that as an accurate belief.

That’s not what they mean, of course.

They mean something like that fathers are the tiny demi-gods of the house and should be treated as such.

The rare moments when my dad is just a man are when I like him best.

And I feel like fighting with him, when we both so aware that he’s living in time his father and brothers never had, seems so pointless.

I don’t want my last words with my dad to be angry.

I’m not happy with him, but I’m not going to fight with him, either.

I have no faith in his god and no love for the idea that my dad is a miniature version of him.

But I count on the power of the words of my god, to bring him safely back. Someday his luck will run out. There is no escaping that.

Just give us as much time as we can get.