It came via UPS. It looks so good. I can’t stand to look at it too close, because I’m afraid to find typos we all might have missed, but I also don’t want to stop looking at it. This is a skill Samantha and Beth have that I just don’t. I mean, I thought it looked fine and nice on the computer, but seeing it in a hard copy, it looks so much better. How did they know?

I want to throw up a little bit. I’m completely not ready. And yet, here we go. Now it’s a race to get everything ready by the pub date (It’ll probably go on sale long before the pub date, but one must have one and mine is Halloween, of course). 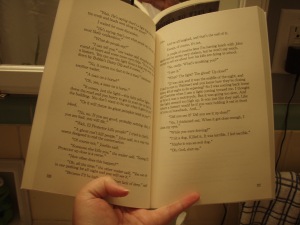 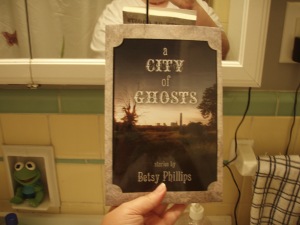 Lord almighty, I’m glad it came from someone I know, because I totally just blurted out that this whole book thing has given me the nervous poops since at least Monday.

And now, I admit it to you!

I was hoping the check copy of the book would come early today, but it did not. So, hopefully tomorrow.

My dad was all “Eh, whatever. Call me when you get a case of books.”

Ha. He’s all “Your next book should be about the ghosts of Memphis. They’re all Democrats over there, so you could call it ‘Memphis Voters.'”

Don’t worry, Memphins. I’ll point him out to you the next time he’s in town.

I know, I know, it’s not supposed to be here until tomorrow, but truly, all I can do is sit here and will myself to not call the Butcher every five minutes asking him if the mail is here. This morning I even went out and checked the mail again, as if the folks at the Whites Creek Post Office might have been all “Oh, let’s go out a second time on our route, just because.”

I want to go out and sit next to the mailbox.

I made a big to-do list yesterday of stuff to do to get ready for the book.

Instead, I looked up the great-grandma of an acquaintance of mine and discovered that said great-grandma had a mother named “Barbary.” Now, all of the family trees listed it as “Barbara,” but in every single census record and will and deed I found her named in, her name was Barbry or Barbary.

I can’t remember what this real Barbary’s middle name was, but all day I’ve been wishing I had a daughter to name “Barbary Jane.”

Oh, I forgot to tell you the other thing I found, while looking in at my people. Damn it, I wish I could remember what town it was in Michigan, but they were trying to split it into three towns–which they wanted to call Town X, East Town X, and Town X Jr. If I’m remembering right, I believe Town X Jr. ended up being Novi, Michigan.

But I am so damn in love with the idea of there being Town X Jr.s. I’ve heard of New Town Xs but never Juniors of towns.

I wonder if any town in the United States has that naming convention.

I keep trying to think of how to put a post together for Pith about the whole “Ground Zero” mosque, but I just can’t quite figure out what I want to say. I am embarrassed for people I know, good people, who think it’s inappropriate for the community center to be built there. It’s like seeing your friend shit herself in public and not know it.

We have to endure all this bullshit “mama grizzly” rhetoric and angry tea partiers and all this “We are so badass and you have underestimated us” nonsense to which I just want to say, “Then start acting brave.”

But I have to say, I honestly feel like we have, as a country lost a public notion of the bravery of gracefulness and good manners when dealing with people different than us.

Even Jesus says he was a stranger and we took him in but we, as Americans are all “But not if you show up here, not if you want to come in by that entrance.”

I feel like, when people say “Oh they shouldn’t build a mosque there” that they might love our country, but they don’t have any faith in it. That they see it it as this weak, shameful thing we have to hide from others and only enjoy when no one else can see it.

And I am baffled by people who on all other occasions find New York to be a den of sin they can’t be bothered with who are all “Oh my god, I should have some say in this like I have some stake in it!!!!”

And I’m coming to suspect that there’s an imperial impulse in deference–that demanding people defer to some group, be it 9/11 families or the sensibilities of the heartland or whathaveyou without any other reason than “it’s the right thing to do” is fundamentally contrary to the aims of this great American experiment because it sets up a class of people whose whims dictate public policy without accountability.