Yes, the rumors are true–the Butcher ate the last of the apple pie. I can’t blame him, though. It was delicious. Still, I am sad that I didn’t get to eat the last of the pie. On the other hand, I must say that, when you just use store-brought crust, making apple pie is embarrassingly easy-peasy.

But I was hoping to get to the first version of the story of how the old woman becomes a flock of birds this evening, and I can’t write when he’s watching TV. I just can’t get in the right vibe.

Good thing Extended Family Dinner is tomorrow night. The Butcher is considered an extended family member of his friends who live over at the next major road out of town, so he goes over and eats delicious food. And I have time to write!!! 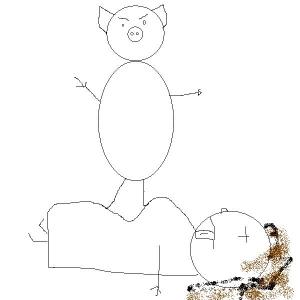 Gruesome depiction of my death at the hands of a wild hog.

Not only does the Butcher now have my cold, he spent all yesterday cleaning up the garage so I could put my car in there only for me to discover that the garage door won’t open. He said he’d try to figure out what was going wrong today, but I told him that it could wait until he felt better. And he said, “I don’t feel that bad.”

I got my flu shot yesterday, so I’ve been feeling a little achy and light-headed today. But the doctor also thought that the cold I had was fucking with my inner ear, too, so that could be part of it. Over at Pith, I mentioned, yet again, the wild boar problem in Tennessee. I know this is a serious problem, but “wild hogs are definitely a major threat to all Tennessee residents” just cracks me up. I imagine some horror movie where Nashville is overrun by angry pigs who can climb stairs. I guess probably up at home a place like Hammock Nation probably would easily fall to angry pigs. But I’m just not feeling the threat here in town.

Will they learn to open doors? Ride the elevator? I don’t think so.

And what if people don’t eat pork? Are they in danger from wild hogs since they won’t eat the contaminated unwild hogs? Will the wild hogs come along and trample the non-pork eaters after they’ve killed the rest of us with their pork-borne pathogens?

I’m telling you right now, first it was vampires and then werewolves and now zombies. Next will be wild hogs.

I am less afraid than I should be because I live with a guy who used to be a butcher. I’m expecting he will save me. Of course, I’m also expecting he’ll be able to figure out how to fix my garage door, so…

I always wondered who would ever use those pig-tail butt-plugs at the Hustler store, but now I’m seeing that we may need to disguise ourselves in order to survive the Hogpocalyse.

So, the Butcher is coming down with my cold and we’re sitting here on the couch, me working on my Pith post, him working on trying to breathe, when the cats had the weirdest fight.

And then they both turned their backs to each other and engaged in a made tail-swishing in each other’s general direction.

And I guess the new kitty lost because she had to follow me around the house looking for sympathy.