Jenci has pretty much the definitive post on Akasha Adonis’s situation at the moment. I would just like to point out that when you have a woman like Jenci who wanted Zach Wamp to be our governor and a woman like me who prayed every day for a real Democrat to miraculously materialize on my ballot on the same side of an issue, there is a problem. And it’s not with us.

I have a lot of thoughts about this. I remain terrified for Adonis. I am, of course, worried that she’s being treated differently than other people who interact with the Jackson Police Department because of her gender identity. I am also worried that she’s not–that, instead, the Jackson police decide at the scene of the crime not whether a crime has been committed, but whether a crime has been committed against people they think are worthy of police assistance, and that, if you’re not worthy, tough shit for you, and that, in this case, the thing that made Adonis unworthy was her gender identity, but that it could happen to any of us for any arbitrary reason.

I know and learn hard over and over again that the police don’t have an obligation to protect us. The courts have said as much and we’ve talked about it here. The “solution” for that I’ve always heard is that then it’s on us. We need to buy guns to defend ourselves. We need to get big dogs. We need to do whatever. Just that we need to stand up for ourselves and take care of our business because we can’t count on the cops to do so.

Now, I don’t know what the truth of the matter in the Adonis case is. But here’s what the cops are already floating around town, what they told Adonis

In phone conversations between Akasha and the JPD, she was told that the JPD would not pursue the case further because the surveillance video from the scene appears to show Akasha shoving first the large man who had joined in the verbal attack against her, her mother, and the unnamed customer.

The police say there was a verbal attack against her, but she shoved first, end of investigation.

Let’s just keep in mind Adonis’s context. She lives in the state where Duanna Johnson was murdered. Where Johnson was first beaten by cops and then mysteriously murdered.

Of all of the people in this state who might have bought into the “I need to be my own police” narrative, it would be little wonder if Adonis did buy into it and if she did shove first. No one else involved in that incident knew how high the stakes are for transgendered people in this state, but Adonis does.

A while ago, Melissa McEwan wrote this post called “The Apologists’ Trap,” which is a discussion that moves beyond “Why don’t women just hit men who harass them?” into “Why it’s a bad strategy for women to hit men that harass them.” And let me be clear, I am not saying that Adonis was wrong to shove first, if that is indeed what happened. Someone starts yelling at my mom and all my talk about what one should do in an emergency doesn’t count for shit. I will kill myself trying to kill the person who accosts my mom at a store. If what the police say is true, I understand completely and can’t say I wouldn’t be in the same situation.

But what McEwan is getting at here is that encouraging women to hit men? It ends up hurting women.

People who feel entitled to audit others’ responses to harassment don’t stop auditing even if their recommendations are taken, which means, in practical terms, that a woman who takes their advice and responds to harassment with violence will not be commended, but judged, her actions investigated to see if the (previously recommended) violence was warranted.

Spoiler Alert: It never will be.

And so, bless her heart, here Adonis is, with the police forwarding a narrative in which a woman put hands on a man who was harassing her, which they use to then justify not investigating the assault that left her jaw broken and teeth missing.

Funny how that works. Defend yourself and lose your shot at justice.

In his latest column, Chet Flippo talks about almost resigning from the advisory board to the school of music at Belmont. You should read the whole thing, but here’s the part I want to look at more closely:

And I really didn’t care for that kind of paternalistic moralizing from on high. I’ve listened to sermons like that from such mossbacks for many years. No more. So I was writing that resignation letter and then I learned that Mike Curb, who finances the huge part of Belmont that I advise, his Curb Music College, has come out in support of basic civil rights at Belmont and said that the university is not a church and should stop trying to be one. You know, that sounds very simple. Basic civil rights. Human rights. But you won’t find that in many parts of this supposedly free country. Nashville is still feeling its way in that area, but it’s doing pretty good. Doing better, I should say. So I’m sure that Belmont will right this sinking ship, I hope and trust. The University has too much at risk to not set this situation right.

Okay, I think this means I had slightly misread the Curb situation. I had not realized he was not just drawing a line in the sand, but signaling to others not to abandon the University if there’s a chance this can be fixed.

I don’t know if Belmont is aware of how closely it came to self-destructing this week, but as stories like this come out, we’ll find out.

Sure, being able to tell someone’s here illegally just by looking isn’t much of a superpower to have right now, but when we get those Arizona-style laws? Turner will have a lucrative side-gig.

Until then, he’s been handed a set-back when it comes to his superhero career.

So, this is curious. I’m going to give a post to the subject of this email in a second, a real post, but I want it to sit higher up on the blog so I’m saving it for last. As you might imagine, I email the folks at the Scene pretty frequently, sometimes to tell them I have posts ready, sometimes to tell them I heard something I’m not in a position to do anything about, but that they might want to check out, and sometimes just to gossip.

I’ve never had a problem with Yahoo mail about an email I wanted to send until today.

Today, I tried to email Jim Ridley about Jenci’s post about Akasha Adonis, because, as you know, I’m concerned that she’s not being treated like other people are treated by the Jackson police (though, whoa to Jackson if she is!). I linked to Jenci’s post in an email that was a reply to something he’d sent me and that we’d gone back and forth on a couple times.

And this is the error message I got. 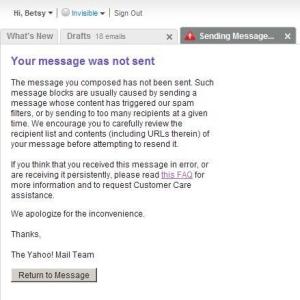 Weirdly enough, I can’t sent that link to anyone.

In all ways, according to Yahoo’s own standards, I don’t  look like spam. I wasn’t emailing to a bunch of people. I wasn’t sending out massive amounts of email all at once. And I was emailing someone who has a long history of emailing me.

So, I tried to send the link to Steve Haruch also at the Scene. No dice again.

Edited to add: Oh, and I forgot to say that it is only this link. I can email anyone else about anything else and I have even been able to email Jim about other things.

It’s a little spartan around here this year for Christmas.

Both of my brothers are out of work. So, you have to strike a balance about getting them something you feel good about AND that won’t make them feel bad about not being able to get you anything in return.

I wish we could just say “Life’s hard, let’s eat.” and not worry about presents, but we’re not quite there yet.