Well, round one of “get the cat wet, pat the cat dry, apply skin-growing goop” was a success. As far as cats go, this one is pretty accepting of being put in the sink and having her leg hosed down.

Tomorrow, we start the antibiotics. 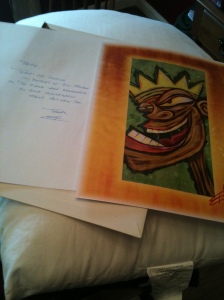 When I got home from work, there was a garbage bag tied to my back door. I, of course, assumed this had something to do with the Butcher, but I took the garbage bag, opened it and found inside a flat cardboard envelope–addressed to me. I opened it and out came this cool piece of art.

My very first thought was, “Why the fuck are people sending me cool pieces of art in the mail?”

And then I remembered this.

And my very second thought was “Whew, at least he didn’t send me the Haslam picture. I’d never be able to explain that to guests.”

Some days, this is a weird life. Cool, but weird.

First, I love my vet. That is all.

Second, she found the new kitty’s paw pad! And it’s still getting blood. She thinks there’s a good chance it will reattach and new kitty will be whole. We have ointment for her wound that we have to squirt in there twice a day (we’ll see if the Butcher’s up for helping me) and antibiotics she has to take twice a day. And we have to rinse her wound twice a day. Her biggest challenge will be infection. But the wound looks good, so the antibiotics should take care of that. Second biggest challenge? But most important? Keeping the flies out of the wound. We do not want maggots.

Needless to say, the cat will not be allowed outside until she heals up.

But apparently in the heat of the summer, flies and their offspring are a real problem.

Anyway, she goes back to the vet next week, hopefully for an all-clear.

I voted on the way in after the vet. I went to the wrong church on Kings Lane at first. Silly me for going to the polling place nearest my house. And then, at the actual polling place, the woman had me check that I was applying to vote in the Democratic primary. Which is clearly not right.

I’m already running late this morning but three things from this article.

After 287(g) began in 2007, the total number of Hispanic defendants arrested for not having a driver’s license more than doubled from the previous year. And according to a January 2008 report from the sheriff’s office, the top overall charge for those in the 287(g) population then was not having a driver’s license. Even as late as July 2010, arrestees flagged by the sheriff’s office for deportation were so disproportionately low-level offenders that the Department of Homeland Security — which oversees ICE — sent an email urging corrective action. Davidson County’s was one of only nine 287(g) programs in the country so far afield of the new standard.

2. If the police department honestly believes they have good ongoing relationships with the Hispanic community and it’s the people trying to bring to their attention the terrible relationship between the Hispanic community and the police who are “fear-mongering,” then we have some enormous problems in our police department. Let’s hope this is just posturing:

Metro police spokeswoman Kristin Mumford vehemently denies that accusation, accusing Ozment and other advocates who push it of “fear-mongering.” She claims the department maintains a good ongoing relationship with the city’s Hispanic communities. She also cites official police policy, which encourages officers to give citations to those who don’t have a driver’s license when possible.

Karla Weikal, spokeswoman for the sheriff’s office, says Gonzalez should’ve had access to either jail phones or, at least, a pay phone in the lobby. She also denies Gonzalez’s allegations that deputies there told her she would never see her family again, and that she’d never get to complete her education because she would be deported.

“Individuals who are incarcerated make many allegations,” Weikal says. “We have no reason to believe these allegations are true.”

When one party has been chastised by the Federal Government for not executing a program according to guidelines, when they’ve been sued by people for incorrectly implementing the program, when they embarrassed the whole city by shacking a woman during childbirth, when whole neighborhoods are terrified of them, and when the other party is a kid who’s never had any problems with the law except for driving a hair too fast, it isn’t the kid with the credibility issue. Let’s not bullshit here.