I have reached a big roadblock in my story. Other than revenge, I don’t know what my bad guy wants.

I was working on a post for Pith about the Tennessee Obesity Taskforce [sic], which reminded me of the upsetting discovery that their early promotional material included illustrative photos of what a problem fat people were that showed fat people as slovenly and ridiculous and as a step down on the evolutionary ladder. And something dawned on me. When you have a situation like obesity, which is linked to bad health outcomes, how can you tell if you’re dealing with an actual health crisis or a moral panic?

And I think the way to tell is that, in a moral panic, the people who are ostensibly helping openly ridicule the people they think need help.

I’ve just come to this realization, so I’m not certain it pans out 100%, but I’m trying to think of any time I’ve heard of a natural disaster or an outbreak of illness where the people who showed up to help–not the assholes who might sit back and do nothing but take potshots, but actual show-up-to-help folks–openly made fun of the people they were helping. And I can’t think of any.

But here are the people who have showed up to help fight obesity, openly making fun of obese people.

I think that’s a tell. It’s a little involuntary twitch that lets you know this isn’t about health, but about morality.

I’m going to have to keep an eye out for more examples. 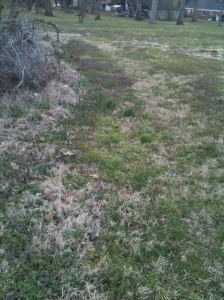 This is how Mrs. Wigglebottom and I have already impacted our surroundings. That light part? Is the path we walk every morning. I guess our passing through twice a day is enough to make it less habitable to the purple stuff, so it just doesn’t grow where we walk.

So the one thing I saw in Hannah that I would be completely remiss to mention because now I want it with my whole heart, is this fireplace. When Hannah and her dad are hiding in the arctic, they live in this cabin, the whole back wall of which appears to be a giant fireplace which they regularly sit inside of for warmth. It could possibly be better described as a small stone room with fire in one corner than just a fireplace.

Sure, it’d be an added bonus if the fireplace included Eric Bana, but even if not, man, I want that fireplace.

1. Since my rule of thumb is to run all rumors of government incompetence by libertarians (because they will have already heard the rumor and probably tested it themselves), when I saw this video about how easy it is to get metal objects through the full-body scanners at the airport, I asked Blake Wylie about it and, while he hadn’t seen this video, he pointed me to Adam Savage from Mythbusters accidentally making a similar discovery. Apparently there is no metal detector component to the full body scanners. All detection is done visually. So you can accidentally or intentionally hide metal from the scanner by placing it on your side, where it will blend in with the black background. Holy shit!

2. I’m a liberal heathen, so take my opinion with that grain of salt, but I think it would be a mistake for folks at a state or national level to assume that Santorum won here because social conservatism is so popular in Tennessee. What would I make of a Santorum victory? Romney can’t motivate Republicans to come to the polls. I think that’s a scary enough message. Trying to suss out the “why”s doesn’t really matter.

3. Speaking of politics, sometimes people say things and you realize “Oh, the people of Tennessee probably weren’t wrong to purge the Democrats.” I wrote about this for Pith last night, but I don’t know how soon it’s going to be up. If ever you, as a white person, are tempted to complain that something happened to you and thus you were treated like a black person, don’t do it. Even if you think you have some social justice point to make. Even if you think you are signalling that you now better understand the plight of black people. Even if you don’t mean black people now, but ones a hundred years ago. DO NOT DO IT. Complaining that you were wrongfully treated like a black person sounds racist as fuck. Do not do it. Plus all the shit I get into at Pith about how having to cast a provisional ballot is just not the same as knowing you might be killed for voting.

4. Speaking of Pith, I wrote this thing–“Where Are All the Women Writers?” which you should read if you somehow haven’t read it when I wrote it here. Ha ha ha.