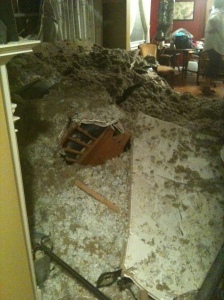 Insurance is not going to cover the ceiling collapse. I’d been warned that adjusters tend to be jerks. My adjuster was very nice and about as upset as I was that there was no way to finesse things so that it would be covered. I think the thing is that, seeing it in person, it’s hard not to feel like something terrible and inexplicable that deserves some kind of response happened. But he and I both looked through his book and there’s no loophole. Nothing that makes this the kind of collapse coverable.

I cried. After he left. Just sat in the other room and had a fucking pity party.

He said a few things that I’m trying to keep in mind.

1. It could have easily killed us. The system they used on the ceiling is incredibly heavy–a thin layer of drywall, concrete, and then a layer of drywall over that, all held by nails, smooth nails–all held together with weird wires. He estimated that every square foot weighed about 30 lbs. which would have been like having a bowling ball dropped on your head from eight feet up. So, you know, thank the gods that we were not under it.

2. We should wear masks when the insulation is stirred up.

3. We could do the drywall ourselves, but we need to get someone who knows what they’re doing in to check the ceilings in the rest of the house. He thinks going through and attaching the ceiling to the beams with drywall screws will fix the problem.

So, that’s that. I’m not sure how we’re going to do this. I’ve spent as much time this morning helping the Butcher and my mom process their feelings as I have having my own feelings, so, you can imagine how unfun that’s been. But I told the Butcher that we’re going to come up with a plan this evening. We’re going to figure out what we need, what kind of help we need, and then we’re going to ask for it–advice, help, recommendations, etc. And we’ll just keep doing it, whatever it is we can do, until its done. We’ll just make a list and work on down it.

So, that is the plan. I may need some stuff from some of y’all as this goes on. I don’t know what yet, but I promise I will keep everyone in the loop as I can. I will also be a slobbering mess, because that is my way. But I will be a slobbering mess who is determined to be able to cry on her couch by Sunday. One week is all I am going couchless.

Does that qualify me as a wild woman? Probably not. But god damn it, I am going to get by or die trying.

As y’all know, I am trying hard to break the habit of reading Pith comments, a task which is greatly aided by them being almost irrelevant to what I’ve written. But this morning I saw two things–that folks are going after negative reviewers on Good Reads and that folks are targeting negative reviewers of the new Batman movie on Rotten Tomatoes (though I lost that link)–and it got me thinking that it’s kind of funny that, though the terrible blog commenter is universally disliked, it has become the dominant mode of discourse.

It reminds me of the conservatives all pissed at Haslam because… what? He’s not punishing a woman for having the audacity to be Muslim or some of his staffers for being gay? Things that, even if people think they’re wrong, do not affect them. And yet, they’re furious that those people aren’t being punished.

We live in a world where we have a lot of access to information about people we didn’t used to have–we know what a mom in Utah puts on her dog today; we know what people in a city we don’t live in, writing for a newspaper we don’t read, think of a movie we haven’t seen; we know that a guy who lives a twenty-hour drive from us doesn’t like our writing. And we seem to have decided that this gives us such an intimate connection to them that it is our job not just to disagree, but to punish.

It’s like we looked at the blog comments at any local paper, saw they were bad, and decided to emulate them.