It seems obvious to me now that, considering the times and the relatively remote location—it took us almost forty-five minutes to get out to the house on our bikes—that we should have seen evidence of others in the house. But there were no beer bottles , no graffiti, no empty Dairy Queen bags, no cigarette butts. No evidence that anyone was using the house for parties, let alone squatting there.

The small-paned windows were largely broken, so clearly people were getting close enough to the house to do some vandalizing, but now that I think back on it, they were not coming into the house. Only we boys dared do that. 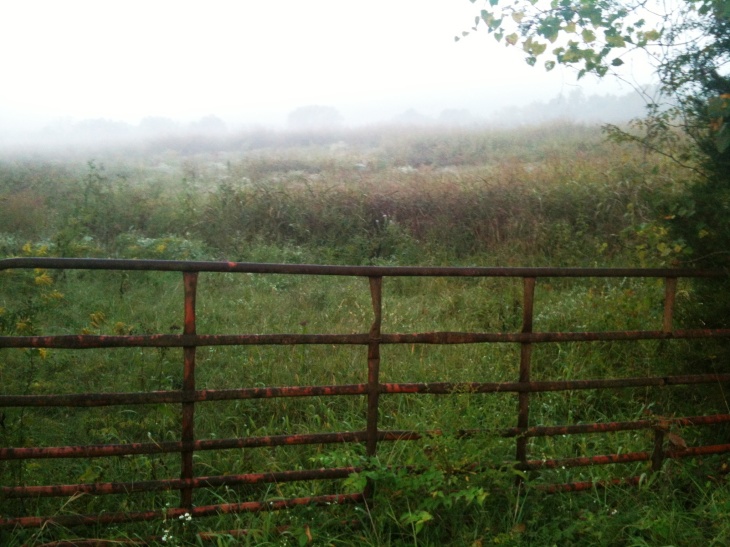 I just want to thank you guys again, from the bottom of my heart. The hole in the ceiling was bad enough. It felt like an insurmountable problem. And then, when it became obvious that the den ceiling was not long for this world… I can’t even tell you how every crack, every creek, every loud truck would send me into a panic that some part of the house was about to crumble.

And y’all made it possible to take care of both rooms.

As of tonight, the ceiling in the den is fixed and the contractor has informed us that the other three ceilings are fine, firmly attached to the joists. So, we’ll watch for cracking and sagging, but as of right now, they are safe.

People can come to our house and not worry about falling ceilings.

Thank you, so much, all of you.

The other day, S. and I were talking about genealogy and my dad’s profound lack of interest in it, at least at first. The amount of ministers in our family has changed his mind somewhat, but I was telling S. that it’s lead to this profoundly strange realization. Both my dad and his brother, my Uncle B., believe that reincarnation is possible. That’s not so strange I guess.

But the idea terrifies my dad. He is terrified that all these recurring ministers are him–that it explains why he’s such a good preacher; it’s not that he has a talent for it, but that he’s had lifetimes of practice–but that he keeps getting sent back because he’s fucked up in some fundamental way over and over again. That there’s some lesson he’s refusing to learn. But since he doesn’t know what it is, he’s destined to be back here again. That’s why, he says, he wants me to keep his file cabinet full of old sermons, in case he shows up again in my lifetime. I can give him the sermons and he won’t have to start from scratch yet again.

I cannot imagine having such faith in the fundamental goodness of a god that you would devote lifetimes preaching on behalf of it while at the same time believing that it would leave you lonely here in the world over and over again.

I sometimes get lonely. It’s human nature. But I never feel really alone.

And I feel bad for my dad, that this thing that is such a huge and important part of his life–religion–is not enough to overcome his suspicion that he’s been left behind again and again.

I’m trying to imagine any post in which a woman stands on stage and talks about the power of prayer and the faith practiced through generations in her family that made fun of her like this one makes fun of Sally Quinn that would not instantly be recognized as completely douchbaggy. I’m not saying such posts wouldn’t happen. I’m saying people would be like, “God, Will Sommer, what a strange jerk.”

I finished Libba Bray’s The Diviners and I really, really like it. I’m glad I went on past the first chapter. But, whoa boy, it is really intense. There were a few moments when I had to put the book down and work up the nerve to keep reading. That was fun and it’s been a long time since I did that while reading a book–had that delicious feeling of wanting to know what comes next and yet not quite being brave enough to look.

I don’t read a lot of young adult fiction, since, when I was growing up, that meant books like Sweet Valley High which I just had no interest in. But I think this is supposed to be a book people in high school and college would like, especially.

And I have to say, if that’s the case, I’m a little jealous of kids today.

So, first chapter? Ugh, just too too much. But it improves rapidly from there and her magical knowledge is just spot on. It’s a real treat.