Much like the daffodils that grew and yet never seemed to thrive at Allendale, Elias never saw the same success or prominence as his brothers. While Allenwood–by the time John Allen was hosting grand engagement parties for his daughter and Sam Houston–was a lavish house on 800 acres with ninety slaves to work it all and Elias’s other brothers had moved out to Smith County and set themselves up in similar situations just outside of Carthage, Allendale sat on just 200 acres and was tended by twenty slaves.

Elias married a local girl, Rebecca Lewis, when he was twenty and they had three children—George, Lewis, and Eliza. Neither Rebecca nor their fourth child, a girl, survived childbirth and they were buried in the cemetery across the lane. Eliza appears to be the last child born in that house to survive, even up until modern times.

Which is not to say that there weren’t more Allen children.  Even among my father’s generation, when you’d leave a door open on your tear through the house to tattle on a brother and someone would ask if you were born in a barn, all the Allens would laugh and say, “Yes,” so well-known was the long-standing tradition of moving the Allen wives to the an outbuilding when the time came.

Elias remarried after a short time and his second wife, Amy, also gave him three children—John, James, and Robert. In 1838, she died of what the farm ledger records as “wasting.” Letters sent to family in Smith County seem to suggest that she was suffering from what we might be tempted to call post-partum depression, describing her as listless and tired, unable to be made to care even about the well-being of her small children. Except that soon James and Robert also became listless and sleepy and, before long, they, too, were in the cemetery across the lane. Infants and toddlers don’t, by definition, suffer from post-partum depression.

The remaining children were sent to Allenwood to live with their uncle John. Elias did not remarry. Still, trouble plagued the farm. In 1843, he wrote to his brother, William, that he could not keep a dog or cat on the property and that the slave women begged him not to use the children for minor household tasks, like firetending, which meant he had to devote an adult to it, a waste, he thought, of labor better used for more difficult tasks.

“They have superstitions about the place,” he wrote, “that no amount of reason or whippings can take out of them.”

Oh, you guys, I spent the afternoon talking with Bradley George from WPLN about Timothy Demonbreun and showing him around the family cemetery. It was awesome, but now I’m feeling all self-conscious. I bet I said “um” a million times. I bet I sounded ridiculous with my terrible French pronunciations. Argh, I want a complete redo.

And the worst part is that I was trying to sound natural, but my god, the SECOND a public radio person puts a microphone in your face, it’s like you can’t help but put on the NPR voice. How bad was it? I was talking about a man best remembered for his prodigious libido and it’s me and I didn’t say “fuck” even once. I don’t even know myself anymore.

It’s weird, but you know, on the one hand public radio gets made fun of a lot as being kind of nerdy and the pledge drives and everything. Why be nervous?

But for me, public radio is like a really cool cocktail party I want to attend, but am just listening to from the hallway. And then, all of a sudden, they’re like “someone from the giant, never-ending brilliant cocktail party of your dreams wants to talk to you about something you know a little about.” He’s honestly lucky I didn’t drive him around while wearing heels and pearls. I wanted to sound erudite and witty. Worthy of the attention.

People, I swear, I shut up when I’m not nervous.

Anyway, if it does become a story, I will link to it. And then I will die of cringing. And of delight.

A doctor has an affair with a patient. She gets pregnant. He pressures her into having an abortion. He tape records himself pressuring her to have an abortion so that he can prove to his wife that their affair is really over. He then goes on to become a darling of the Tea-Party congressman.

But the very fact that it went down this way tells you why it won’t matter. DesJarlais and the voters who vote for him think any abortion they might need is fine, fine, fine and if they have to go to Atlanta to get it or save up for someone to go to Chicago or whatever, well, mistakes happen and anyone in his situation can understand. It’s only abortions that the rest of us might need that need to be illegal, because we want them for bullshit reasons that mean we’re trying to get out of our responsibilities.

If DesJarlais had been caught advising some random woman to have an abortion–a woman we can’t be sure actually deserves it–that might play against him. But since he was pressuring a woman he no longer had use for? Well, what else would you have him do?

It’s hilarious, but it won’t matter. 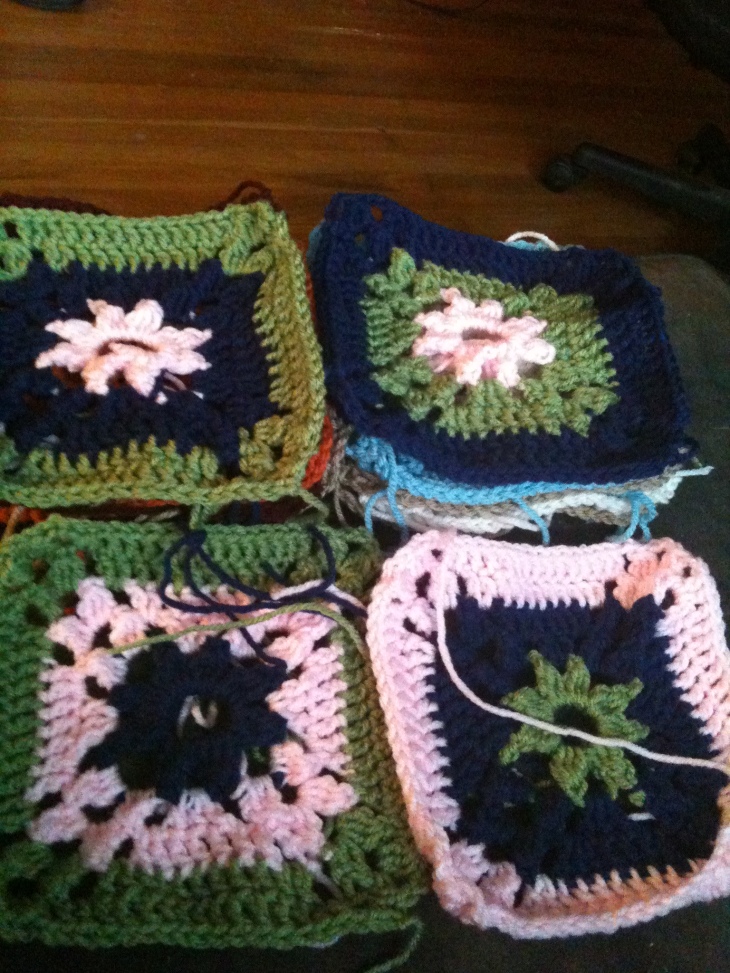 Honestly, though, to me, the awesomeness of this pattern is that it’s got almost a crazy-quilt type look to it. And so, I admit, I found the idea of having my big squares looking identical to other big squares in my afghan when they obviously didn’t have to a little annoying. And so I modified. I will have eight different color schemes, but each square in those color schemes will be unique, unless I fuck up.

1. I don’t like to learn new things, even though the new thing I had to learn to do these squares was super easy once I got the hang of it. I still was a baby for the hour it took me to understand the directions and get the stitch down.

3. I’m always like “Oh, I can just do this pattern with the yarn I have, if I modify it these seventy ways.” Which is fine with a pattern you are used to. Kind of harrowing for a pattern you’ve never done before.

5. Start with the biggest parts and work your way down. The skills you learn tackling the big squares will teach you what you need to do the small ones.