I can’t say that my uncle and I weren’t nervous on that rainy night of watching. That would be ridiculous. We were not, as I’ve said, in any sense childishly superstitious, but this house had taught us that that there were mysteries in the world. In this case an overwhelming preponderance of evidence from numerous authentic sources pointed to the tenacious existence of certain forces of great power and, so far as the human point of view is concerned, exceptional evil. To say that we actually believed in vampires or werewolves would be a carelessly inclusive statement. Rather we were good Methodists, and, as such believed that the Devil could work with circumstances to make it seem so. We were also, though, educated men and believed, no matter what we found, there would be a rational explanation, even if the Supremely irrational Player was behind it.

In short, it seemed to my uncle and me that an incontrovertible array of facts pointed to some lingering influence in Allendale, traceable to one or another of the ill-favored French settlers of two centuries before, and still operative through some malignant will. Perhaps the trauma of the massacre at Lachine set moving certain kinetic patterns in the morbid brain of one or more of them—notably the sinister coffin-sleeping Michel Deraque—which somehow survived their bodies and continued to function in some way, perhaps some kind of contagious, inheritable post-traumatic stress disorder?

Such a thing was surely not a physical or biochemical impossibility in light of recent scientific discoveries—photons which appear to be two places at once or active human stem cells found in 17-day-old corpses. One might easily imagine certain genetic mutations or even foreign bodies kept alive by imperceptible or almost immaterial subtractions from the bodily tissues and fluids of other and more palpably living things into which it penetrates and with whose genetic fabric it sometimes completely merges itself. It might be actively hostile, or it might be dictated merely by blind motives of self-preservation. In any case such a monster must be by definition an anomaly and an intruder, which must be eradicated for humanity’s own safety.

What troubled us was that we had almost no idea what we were looking for. No sane person had ever seen it, and few had ever felt it definitely. It might be pure energy, or perhaps purely a soul—a form ethereal and outside the realm of substance—or it might be partly material, some unknown and equivocal mass capable of changing at will into any form it desired—solid, liquid, gas, or some tenuously in-between state. The anthropomorphic patch of mold on the floor argued at least a remote and reminiscent connection with the human shape, but how representative or permanent that similarity might be, we couldn’t say with any kind of certainty.

We had procured two weapons to fight it, a large and still-classified electromagnetic energy weapon operated by powerful storage batteries that we hypothesized would disrupt the energy necessary for anything—living, dead, or undead to function, and a pair of military flame-throwers in case it proved partly material and susceptible to mechanical destruction—for like those more superstitious, we were prepared to burn the thing to a crisp if there was anything that could be burnt. All this aggressive weaponry we set in the cellar in positions carefully arranged with reference to the cot and chairs, and to the spot before the fireplace where the mold had taken strange shapes. That suggestive patch, by the way, was only faintly visible when we placed our furniture and instruments, and when we returned that evening for the actual vigil. For a moment I half-doubted that I had ever seen it in the more definitely limned form—but then I thought of the legends.

Here’s what I know. Luke says on one of his marriage licenses that he was born in Marion, New York, though he could not have been, since Marion didn’t exist when he was born in 1808. He says his parents were from Connecticut. There are less than 100 Phillipses buried in what is now Wayne County, New York, where Marion now is. More importantly, in 1810, when Luke would have been two, there were only two definite Phillipses living near what would become Marion–an Isaac Phillips living in Sodus and an Isaac Phillips living in Williamson. There were two other men I think were probably Phillipses–Dorcas Phillow and Luther Philims–living in Ontario.

If I’m reading the census right, only one of them had young sons in 1810.

Here’s the blank page that tells you what each column means:

It’s hard to see, but the first column is free white males under 10, of which Isaac has two. Then there’s a free white man between the ages of 26-44. I think we can safely say this is Isaac, since a kid under ten is unlikely to be the head of the household. There’s a girl under ten, a girl between ten and 15, and a woman 45 and older. Probably Isaac’s wife is dead and the older woman is a relative of Isaac’s helping with the children.

But there are no other male Phillips children under 10 living near Marion in 1810. If that’s not Luke, then I am at a total loss for where to continue to search for him.

Oh, y’all, you can see why I couldn’t remember “Beyond, Behind, Below” and wanted to call it “Bed, Bath, and Beyond.” But I read it again to make sure that I want to read it on Saturday and it caught in my chest. I think it must be the most terrible thing I’ve ever written. Not in the “it sucks” sense, but in the “oh, I can’t bear it” way. It’s like being on a roller coaster whose end you can’t see, but are beginning to suspect is going to run you straight into the ground.

I’m not quite sure the end part is as smooth as the beginning. I’m also considering a title change, though to what I’m not sure.

I still hate it, but I hate it in its terrible beauty. If it works live, I’ll start submitting it. I owe it that.

I’ve never written something I hated before–I mean, I’ve written things I hated because they weren’t very good. This is the first thing I’ve written that stands on its own and I can barely bear to look at it. It’s a different kind of hate. I don’t know how to explain it, exactly. It’s just horrible.

The only drawback to reading it is that it requires a little creepy singing in the middle. So, we’ll see how that goes. 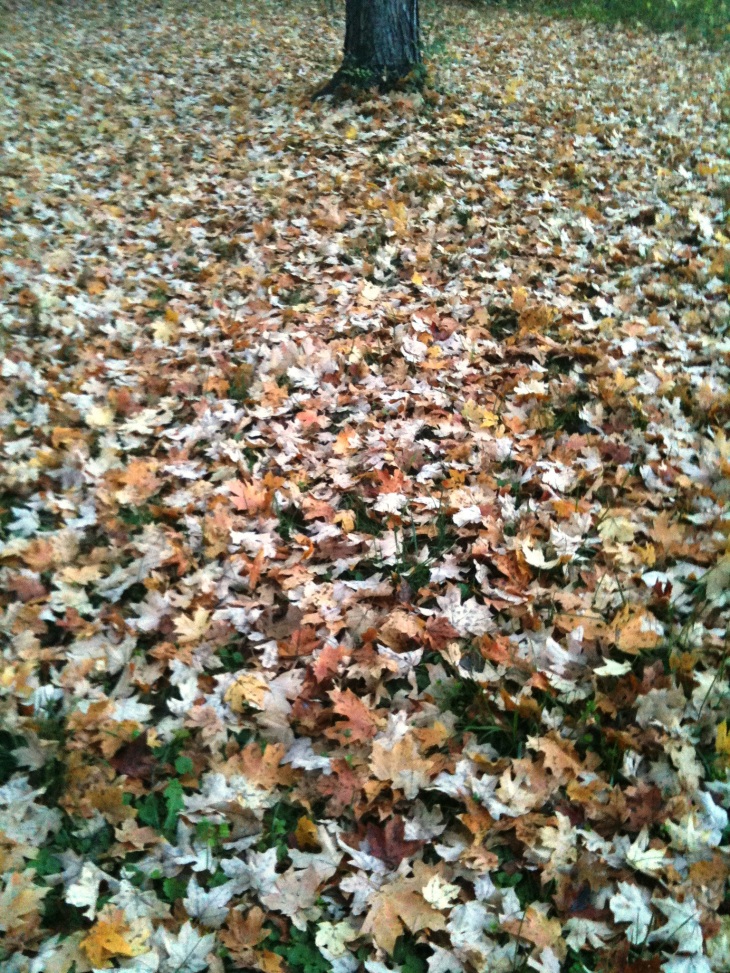 I think my favorite thing about this picture from my back yard is that you can see every limitation of the iPhone camera, but it’s okay.

I spent part of last night cataloging every Phillips in every cemetery in Wayne County in order to try to get a fresh lead on Luke’s people. The thing is that there aren’t that many dead Phillipses in Wayne county, which I didn’t really realize until I did this little exercise. I’m going to say less than 100 and, when you’re trying to get people old enough to be Luke’s parents, you’re down to three or four possibilities.

Now, it’s true that there’s no guarantee that Luke’s parents died in the area, but I think it’s unlikely that all Luke’s brothers and sisters and nieces and nephews would have emptied out of the Marion area. And, in fact, the largest number of dead Phillipses in Wayne County is indeed in Marion. I’ll have to hunt down as much of their family histories as possible and see how they fit together and whether there’s room for Luke to fit in there too.

But I also learned an important thing. It’s likely that Luke came into this branch of the Phillips family (the name, not the person) not necessarily to honor a Phillips ancestor, but to honor a highly decorated Revolutionary War veteran neighbor, for who did I find buried very near Marion? Luke Phelps.

Maybe it’s a coincidence. Maybe not.

There are two Phillips men whose names appear over and over in the early history of the Marion area–Abraham and Isaac. I need to see if either of them was from Connecticut.