As I’ve said, repeatedly, nothing about Scott DesJarlais’ current behavior makes me think he’s not still an abusive asshole. Here’s one more example:

DesJarlais said he believes in “grace and redemption,” adding, “I think God gave me a second chance.”

“And I think unless some people see some sort of political advantage to grace and redemption … they don’t want to practice it on their own,” the congressman continued.

“I don’t know what the reason is behind that, but I know God’s forgiven me. … I simply ask my fellow Christians and constituents to consider doing the same for me.”

Yes, he’s literally asserting the “God has forgiven me, why can’t you?” defense. Here’s the thing. Part of being an abuser is that you want to be in charge, wholly in charge, and able to do what the fuck you want without consequences.

It’s very convenient that an abuser can know the mind of God and decide that God thinks you’ve been mad or too slow to forgive for too long.

The kind of convenient that makes a person suspicious that God’s got nothing to do with it. 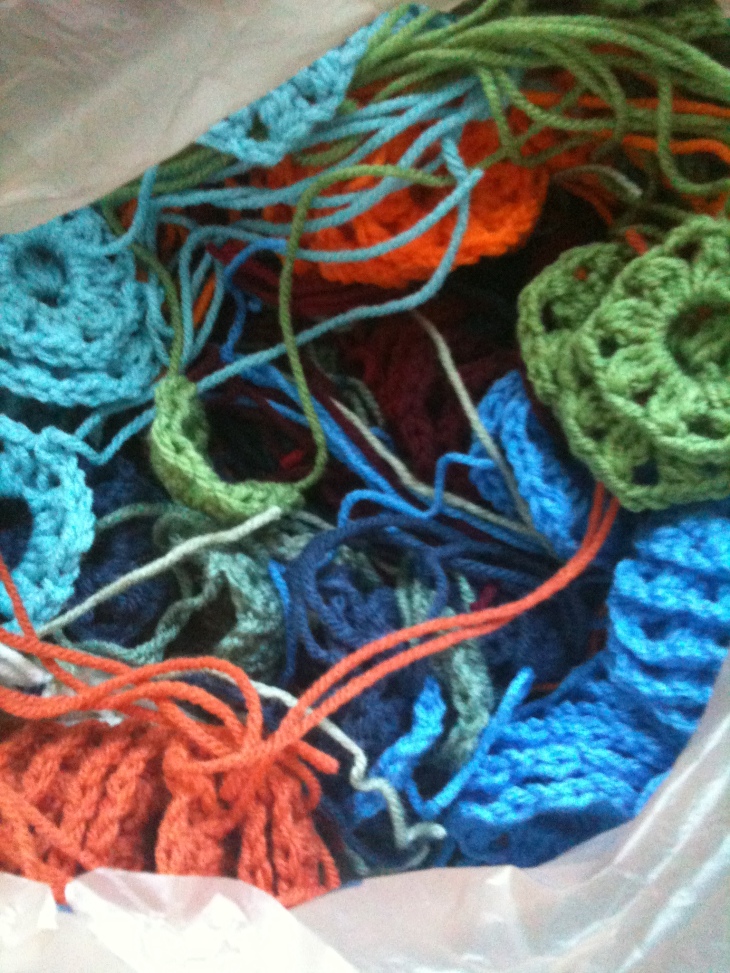 –I don’t know if you can tell from this image, but Rachel’s afghan is now the afghan of two oranges. I think they play nice together, but we’ll have to see. Doing all the small squares first is a little trying on one’s sanity, but I think I’m going to be much happier in the end.

–That Carole Maso book is so good. And it’s nice to read someone I really love also struggling with questions of how one writes what she wants how she wants it and gets published in an industry that seems to want something else. She has the advantage of being a genius, of course, but it’s still comforting.

–I sometimes do feel like the things I want from fiction, from my own writing, are not normal things. There’s some itch I’m trying to scratch that isn’t really interested in what happens next, so much as it is interested on how the pieces that inevitably brought us here fell into place.

–How do you know that this is a place something like this can happen if I don’t tell you what kind of a place this is?

–I have been trying to just soak in the details of the next story for Project X, just let it kind of swirl around me, what kind of story it wants to be, let it live in the kind of mid-conscious of my mind–not at the forefront where I’m actively thinking about it, not in the subconscious where it is out of sight, out of mind (so to speak)–but just right where it can move around some and spit up “What about this?” and “What about this?”

–I have no idea how we’re going to accomplish what the organizers of Project X think we can accomplish on the production schedule we want (completed books in October?! It’s December, man! Most things aren’t even first-drafted!) but I’m going to have to let go of my expectations of how publishing works and just roll with it.

–So, it’s funny because I’m in this obnoxious place where I’m all “no one wants to publish me ever again. I topped out with ‘Frank’ ” in the middle of Project X. It’s super annoying because the undermining part of my brain will not listen to reason.

–I’m going to take the dog to the park here in a few minutes. We have not been in over two months, because of my knee. And them I’m going to come home and throw out Thanksgiving leftovers.

–And let this next story stew.