The patron saint of Tiny Cat Pants has always been St. Thecla, not just because she wasn’t eaten by deadly seals, which is, you know, a terrible way to go, assuming you can find some, and she escaped them, but also because her name is a lovely pun in Spanish making her the unofficial patron saint of computers AND because she’s known as the equal of the Apostles. And because Teckla is my middle name.

Oh, oh, oh and she totally nagged Paul half to death and, if only she’d been able to succeed, think of how much better life would be for women and gay people in the Church.

St. Thecla, who does not love you?

But after spending the day looking at St. Sebastian tied up and draped over shit and filled with arrows, I think he’s got to be a minor patron saint of the blog. Plus, he’s doing work in Umbanda, being all syncretized with Oxossi. And so I can’t help but believe that when Thecla went to live in her mountain, she took like eight paintings of Sebastian to keep her company. I mean, seriously. Every single picture of St. Sebastian could be titled “Man who just got done fucking.” Here are some examples.

I can’t quite figure out what the leg is doing there, but I’m not that worried about it.

I call this one “Oh, no, there’s nothing psychosexual going on here at all!” Arrow t the crotch, red blood on a white towel, after sex lounging. I’m sure it’s all very innocent and murderous. 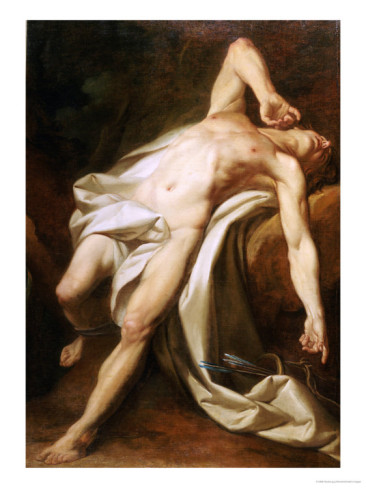 Get your mind out of the gutters, people. He’s near death, not post-coital. Please. Obviously.

Are there hot mostly naked sculptures of saints or has Christianity pretty much conceded all the sexiness to the bad guys?

Here’s the story as I heard it. A man was commissioned to make a statue of Lucifer for a church in Belgium. He made them a beautiful statue–Lucifer looking like a young man, his knees slightly apart, a snake coiled at his feet, a cloth draped demurely over his lap (though he does, at the Butcher noted, appear to be holding his junk). And it was in the church for a while, but church leaders became uncomfortable, because they thought the beauty of the statue might be distracting to young  ladies. Perhaps because of the open-kneed junk holding?

Enter dude’s brother. He makes a statue–probably using the same model–that has Lucifer sitting demurely with his knees together. He cannot chase your darling daughter, because he is chained to a rock. And look, it’s not fun to be the Devil. He has a tear of torment and the kind of toenails you do not want rubbing up against you in the night. Oh, and horns. This statue was deemed more acceptable and put in the place of the first one.

I guess the church leaders did not notice that his pose says “Oops, people who want to fuck me, I seem to have dropped one of my dildos by that apple down at m feet. Why don’t you grab it? Perhaps you’d like to touch my knee to stand back up? Perhaps you would not like to stand back up? I’m embarrassed to ask–so embarrassed that it brings a tear to my eye–,  but could you trim my toenails & give me a blow job?” Probably, because the church leaders thought that the toe-nail trimming bit would rule out any desire to give Lucifer a blow job. Which just goes to show you that the church leaders were doofuses.

Anyway, then an Italian sculptor hears about the sexy Lucifers and is all “I will sculpt one in this same vein.” And… well… I think what we can say about it is that it’s possible we now have an explanation for why the first brother’s Lucifer was holding his junk.