The higher up politicians get, the more it bugs them to have to justify themselves to the riff raff.

But I will give Bill Haslam this–I do think he’s running the state just he’d run a business.

When I took the box out of the back seat he was in and I poked him and asked him if he was dead, there was a moment between that and when his paw moved. And I felt like he was reluctantly coming back from some place to move his paw, and that someplace was somehow below us and around us. I don’t quite know how to explain it. It was like he was pulling himself together from someplace way outside his body. He was nearby, but he mostly wasn’t in that body anymore.

On the other hand, I keep waiting for my phone to ring and for them to tell me that they got him to the vet and the vet saved him. Even though he was clearly not moving in the box anymore. Even though the woman I left him with looked like she was about to cry every time she looked at him. Even though there was something wrong with both his legs and obviously some major internal damage. Even though I didn’t leave them my number.

My brain just really, really wants that to be true. 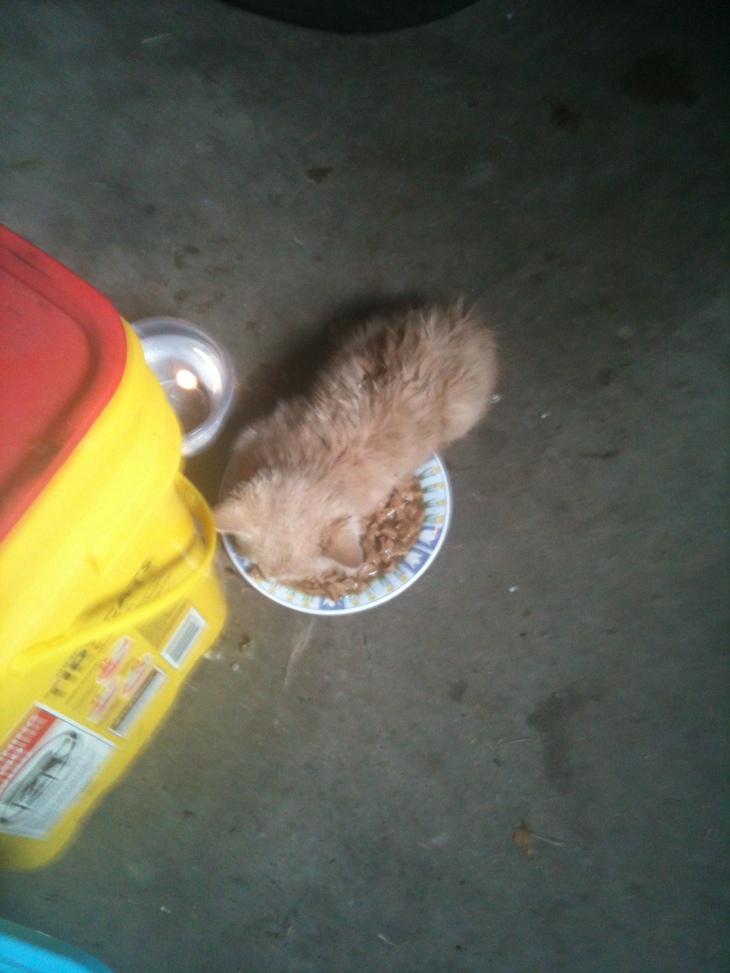 If you think about it, it’s weird that two pictures is more than most cats in the history of the world ever had made of them and yet, I’m sitting here crying because this little guy only had two pictures made of him. That I know of. Maybe he’ll be the Robert Johnson of cats, and a hundred years from now, his cat fans will argue over a third picture, but no one will be able to say for sure.

He drank a ton of water and then dragged himself into his food. I couldn’t tell if he ate any, but he enjoyed it. I got ready for work, found a box and an old towel, and put him on the towel in the box. He left a huge puddle of piss on the floor. He objected a little to being put in the box, but seemed content to be put in the car.

We listened to the radio and he was quiet.

When we got to Animal Control, he was stretched out in the box, his one leg all cock-eyed, and his ears sticking up. He was very still.

“Did you die?” I asked him, poking him. After a second, his paw twitched, as if to say, “I would, if you would give me some peace here, woman.”

When I took him into Animal Control, he didn’t even move when the dog that had been brought in right before him barked.

“I found a cat,” I said. “I think he’s been hit by a car.” The woman behind the desk brought over a carrier and then she looked at him. Her face fell and she said, “Let’s not move him. I’ll just take him back to the vet.”

But I think it was obvious to both of us that there was nothing the vet was going to be able to do, but to make sure he was gone.

I think, at least, my experience of it was that he was so scared out by the side of the road that he just couldn’t relax enough to die. But you know he was someone’s pet, because when he saw me, he seemed relieved, like “Oh, here’s a person. That’s good.” That’s not how feral cats act about the arrival of people. So, then, he had some water and maybe some food and he was in a warm, dry, comfortable place and that was that. He could let go. 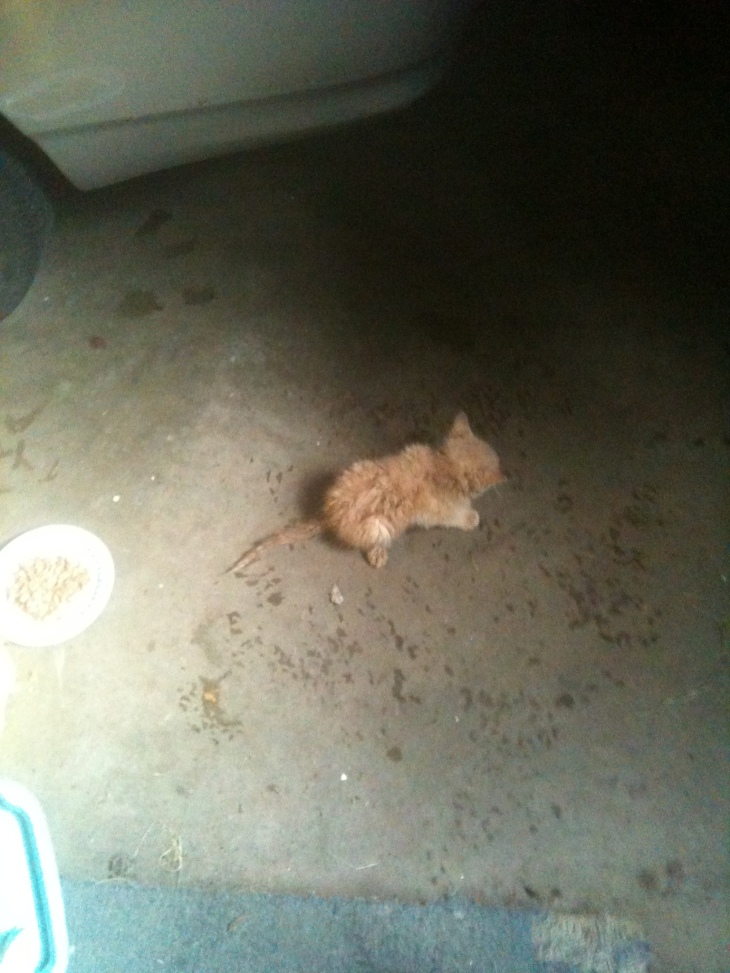 This year of stupid shit that breaks my heart continues. Mrs. Wigglebottom and I were out walking when we heard a cat meowing loudly. I looked around for it, hoping that it wasn’t one of my cats following me clear down Lloyd.

It wasn’t. It was this guy, laying on the side of the road. Even from the other side, it was clear something wasn’t right. We got closer. He made no effort to escape us. And then I saw that he probably had been hit by a car. You can see in this picture that his right back foot doesn’t face the right way. He’s covered in piss and shit. But he doesn’t holler when you touch him or when he tries to walk on that leg, which leads me to believe that there’s probably some nerve damage.

Something seems to be wrong with his eyes. But he saw us to holler at us, I think.

I put him in the garage and chased all the other animals out. I gave him water, which he drank like a fiend. And I gave him food, which he fell asleep in.

I don’t know how he can live, frankly. I’m hoping Animal Control will take him and just make him comfortable and then end him.

When I picked him up–because what can you do but pick them up?–I told him “it’s okay, everything’s going to be okay.” And then I cried because I’m a liar.

I hate the person that left that kitten.