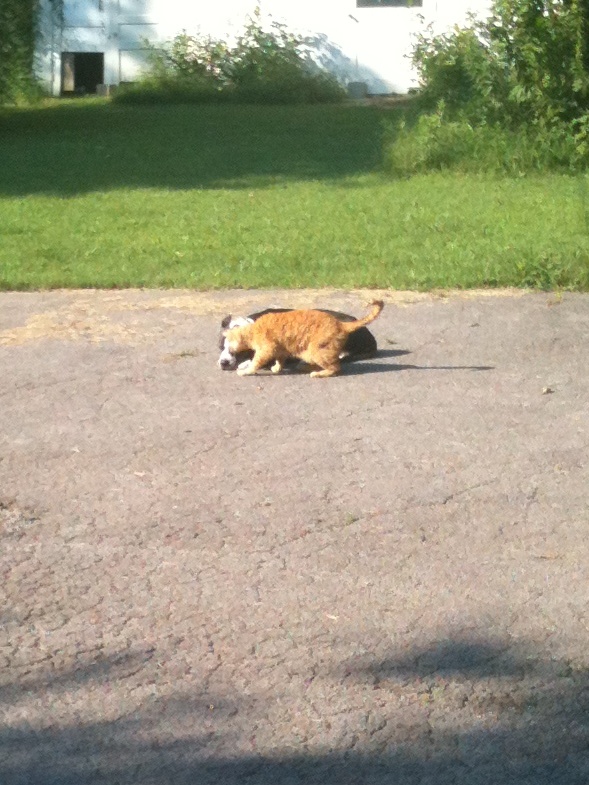 The orange cat is rubbing up on the dog like he doesn’t hate her guts or something.

I’ve noticed that everyone is writing letters to you guys lately–the general gist of which is that you’re ungrateful and don’t know what the fuck you’re doing. So, I thought I’d get on on the letter-writing action.

First off, no one knows what the fuck they’re doing. We all want to pretend like, if only we can figure out which ass to kiss, all will be well and we will still have jobs in industries that continue to exist. But no one wants to be an ass-kisser. So, we sit around bemoaning the fact, not that we have to do it on order to meet the requirements of the superstition we think is keeping us safe, but that you’re not participating in our superstition with us.

I mean, what the fuck do we have to tell you?

Honestly. We’re the generation who made “Woodstock” synonymous with “massive rape fest.” Woodstock. In a related note, we made Fred Durst rich. Our credibility is shot. Any time you wonder “Does Gen X know what it’s doing?” just gaze upon Fred Durst and wonder no more.

The biggest disappointment of my middle age is that we, the slackers who floundered so much in our early adulthood, are now sitting around sneering down our noses like there’s something wrong with floundering when done by you.

There are no sure-footed paths anymore. If there ever were. The other day, I was watching this vile reality show about a guy who owns a car dealership in Texas. He’s probably my age or a little older and he was drilling into his young employees, who are your age, that “only losers fail.”

Bullshit. Everyone fails. You’re going to fail like it’s the motherfucking 1870s around here, because things are messes. Your failure might sometimes have to do with you. It might sometimes be beyond your control. Either way, failure doesn’t make you a loser. It makes you a person alive right now.

I don’t know what the fuck is going on. I know less than I did when I was in my twenties. The older I get, the more I’m like “Yep, that’s more confusing than I knew. No idea what to do about that.” And, honestly, I don’t think anyone my age knows what’s going on or what to do.

Which brings us to the truth–we, Gen X, are having a continuing crisis of faith. It may be the defining characteristic of our generation. We smoked a lot of pot, wore combat boots, and named our kids “Ava” and “Francis” in order to see if that made us feel better. And, by and large, it didn’t. So, now, while we’re still fucking messes, we’re demanding you kiss our asses, like, maybe we can’t do things that make us feel like things aren’t going to shit, but maybe you can make us feel like we know what the fuck is going on.

It’s ridiculous. Gen X has a midlife crisis and wants the Millennials to make us feel like we’re valuable. Next thing you know, we’ll all be wearing toupees and acting like we, of course, listened to Mud Honey back in the day and we don’t even know anyone who listened to Guns & Roses. It must have been those Baby Boomers.

Anyway, that’s what I know–nothing. You’re doing fine. Yes, you probably are fucking up, right this second. Me, too. All of us, too.

Last night I read Chuck Klosterman’s I Wear the Black Hat, which I thought  would be a good follow up to Radley Balko’s book, since they are both, in their own ways, meditations about evil. And they do make an interesting pairing, but it shouldn’t be a comparison Klosterman welcomes. Balko’s book is just much, much better written. Balko’s book has a through-line. You feel like you ended up in a different place than you started. Klosterman’s book is interesting, but every chapter is like “let’s just consider a different (mostly male) villain.”

Instead of making an argument, he’s just mulling things over. Which, fine, except that he ends the book with a meditation on Hitler. Up until that point, Klosterman has made two interrelated arguments–one, we love in fiction what we’d be repulsed by in real life; and two, the villain is the person who knows the most and cares the least. And then I thought he was making an argument that real life people cannot be perceived of as heroes or villains until they enter a kind of fictive space. In some ways, we have to strip away what we know of them as full people in order to reduce them down to a fictional character we can classify.

But then he’s all, “Well, Hitler is kind of the ultimate villain, but he doesn’t fit my ‘knows the most, cares the least’ formulation.” And I kept waiting for him to say that this is because Hitler hasn’t been successfully fictionalized. The aftermath of what he did is still too real. That’s people’s grandparents who are dead. (Same for Stalin, I’d argue). Hitler can’t be moved comfortably into fictive space where he can be simplified and “villainized” because he doesn’t reduce very well. Yet.

Which isn’t to say that Hitler’s not evil. Just that he’s not a “villain” because he’s not quite distant enough to be comfortably fiction.

But that argument never came! Or at least, didn’t come successfully. So, it gave the whole book this kind of sad undermining of itself at the end.

Also, I think he talks about maybe three women as villains in the whole book. One of them is Sharon Stone’s character from Basic Instinct. And I know, in some sense, he’s writing about villains he identifies with. So, it’s maybe not surprising that so many of them are male. But on the other hand, it also kind of is. He can imagine what he has in common with Kareem Abdul-Jabar but he can’t imagine what he has in common with, say, Hillary Clinton? Or go on at more length about how Sarah Palin operated as a villain?

It’s not noticeable at first, but it starts to get weird after a while. Maybe there is something particularly masculine about villainy, but, if so, he should make that explicit.