I always liked the cauldron. When I was a child, on Sundays it was my job to climb in it and clean it out. My mom and her sisters would tilt the big black pot on its side and I would strip down—because it wasn’t a job you could do in clothes you didn’t want ruined—and climb in, like it was my own personal cave. Six days a week, that cauldron boiled and bubbled. So, even when empty, the old metal stayed warm. I loved how it felt under my hands, like an old, happy lizard.

My mom or one of my aunts would hand me in a bucket of soapy water and I would get to scrubbing. Lots of thing clung to the sides of the cauldron. You might find a toad’s leg boiled firmly to the side. Sometimes bits of hair from a love potion would wrap around rough spots in the metal and you could never get them untangled. I’d just holler for a match and burn the hair up. Then I’d scrub that spot extra well.

It was important to get it clean between spells. You didn’t want a spell to bring a storm to contaminate a spell for safe sailing weather, for instance. And so I was always careful. Thorough.

Sometimes, other witches would ask to borrow me and I would earn a shiny gold coin or a cat that could recite poetry (though only Byron, which I eventually found annoying) or other strange and wonderful things by cleaning out their cauldrons.

So, in retrospect, it’s not surprising that, eventually, the Three Sisters would send for me. They lived in the heart of the woods under the forest’s largest tree. They stirred a great cauldron all had heard about but few had ever seen. In that cauldron, it was said, bubbled the fates of everyone.

I went to see them.

“That’s how I can fit in the cauldrons,” I said.

“Well, anyone could fit in our cauldron,” said another. “That’s hardly the issue.”

“We share this cauldron with our brother,” the third one said. “He takes it half the year and doesn’t stir it at all. He lets the fire beneath it burn out. He tells people it’s a well and lets them drink from it!” She said this last part with angry incredulity.

“But that’s been the arrangement,” one of the other sisters said. I was having a hard time telling them apart. They all seemed equally old and, if they hadn’t been triplets by birth, time had made the so, each in a long, gray robe, her wrinkled face framed by long, gray hair, her squinty eyes gray from cataracts. “He keeps still waters. We keep them bubbling.”

“But look here, child,” another one said. She led me over to what I thought was a great rock heap. But then I saw it was a pile of rocks with an enormous cauldron nestled inside. In order to keep it heated, they would move a large rock aside, and feed logs into hot coals. It was as if the cauldron were built right into the chimney of a crude brick oven. From a distance, it certainly could look like a well.

We peered into the rolling waters of the cauldron. Unlike any concoction that my mother and aunts had made, it was clear. I could see all the way to the bottom, just like looking through wavy glass.

“You see?” one of them asked. I looked harder and I did see. There, on the bottom, was something, rather large and round, maybe the size of a golf ball and smooth.

“We don’t know. Our brother must have dropped it in there. We want you to fetch it out.” Another one of them explained.

They procured for me the things I needed. I stripped, tied the rope around my waist, tied the rocks in my hair, and handed one end of my tube to one of the Three Sisters. The other end went in my mouth and, with a splash, I went into the warm liquid.

Down I went, past yesterdays I recognized and yesterdays I didn’t. Past great wars and pathetic skirmishes. Past more babies crying on more nights than you’d think the moon could have given light to. Past so many mornings when a man looked over at his lover and wondered at his good fortune. Back I went, past the time of cars, past the days of carriages, through the days of our own two feet, back so far I could almost feel my own knees scraping on the dirt as we crawled through the jungles.

And finally, there it was—that strange white ball—just within reach. I stretched out for it and just as I touched it, it swiveled, and I saw what it was—an eye. I was so startled that I gasped, purely by reflex, and I lost my tube and took in a mouthful of what tasted like the most ancient days.

I don’t know how I managed, but I grabbed hold of that eye with one hand, and with the other, I struggled to loosen the rocks in my hair. My lungs were burning and I yanked on the rope, hoping the Three Sisters would somehow sense my alarm and pull me up. Another rock loose. And my eyes were watering. Finally, the last rock. I struggled against my own hair, as if it were somehow not a part of me, but some stupid beast in its own right, clinging to that rock like some kind of barnacle. Against my will, I breathed in—my body so desperate for air. I tried to stop, but I breathed in again.

I watched the last rock fall free of my hair, felt myself floating up through all our days, and I could see the surface, but it was already too late. I was dying. I may have died.

“Little Cauldron Cleaner,” a deep voice said to me. “Wake up.” I opened one eye and then felt overwhelmed by nausea. I turned my head and threw up what looked like an ocean. A great hand held most of my hair back. The other hand brushed what was in my face away. I threw up again. This time, along with water, I tasted dances and first kisses and first drunken spats.

But finally, I was able to sit up and get a better look at my rescuer. He looked like an old soldier. He had that way about him of being comfortable in complete chaos. But, at the same time, he also looked like an old wizard, with long silver hair and a great long silver beard. But when he smiled, he seemed like he might be quite young.

“It wasn’t anything,” he said. “I saw you were in trouble and I came to help.”

“How…?” But then I noticed that he only had one eye. In the socket, where the one in my hand should have been, was a vast blackness, dotted with stars.

I handed him his eye. The eye he had seen to save me through.

“No, no,” he said. “I intend for that eye to sit at the bottom of the Cauldron of Fate.”

“I don’t think the Three Sisters want your eye in their cauldron,” I said.

“Obviously not,” he smiled and, I swear, he winked at me, closing his lid over the vast mystery of the universe that he carried around with him. “But it appears they’ve gone.” I looked around and he was right. Their cottage was dark and had an air of not having been lived in for months. Just how long was I out? “If this were your cauldron, surely you wouldn’t mind if I kept my eye at the bottom of it?”

“No,” I said, “but how can one person have a cauldron this big?”

“She couldn’t,” he agreed. And as quick as a flash, he reached in his belt, drew out his knife and hacked me in three. Then he whispered something over me and I was we.

“Exactly,” he smiled. And, plop, back went his eye in the cauldron, where it remains.

You can go here and read Chuck saying incredibly nice things about me. Then you can scroll down and listen to me reading the stories I read last week. Now’s your chance to hear an excerpt from The Wolf’s Bane.

In a hospital in Georgia, my brother’s girlfriend is having my niece. I want constant updates, even if those updates are “no update.”

My parents are not interested in providing me with enough updates to satisfy my curiosity.

But I want to know when Rose gets here safely and that her mom is okay, too.

(I suppose, once she gets here, she’ll have to get a pseudonym like everyone else.)

I finished up tucking ends yesterday and am now putting squares together. I decided to crochet them together rather than sew them together both because I want the blanket to have some structure to make up for all the different yarns and how they’ll wash and loosen up over time and because I wanted the red to be dramatic.

Here’s how it looks on the front: 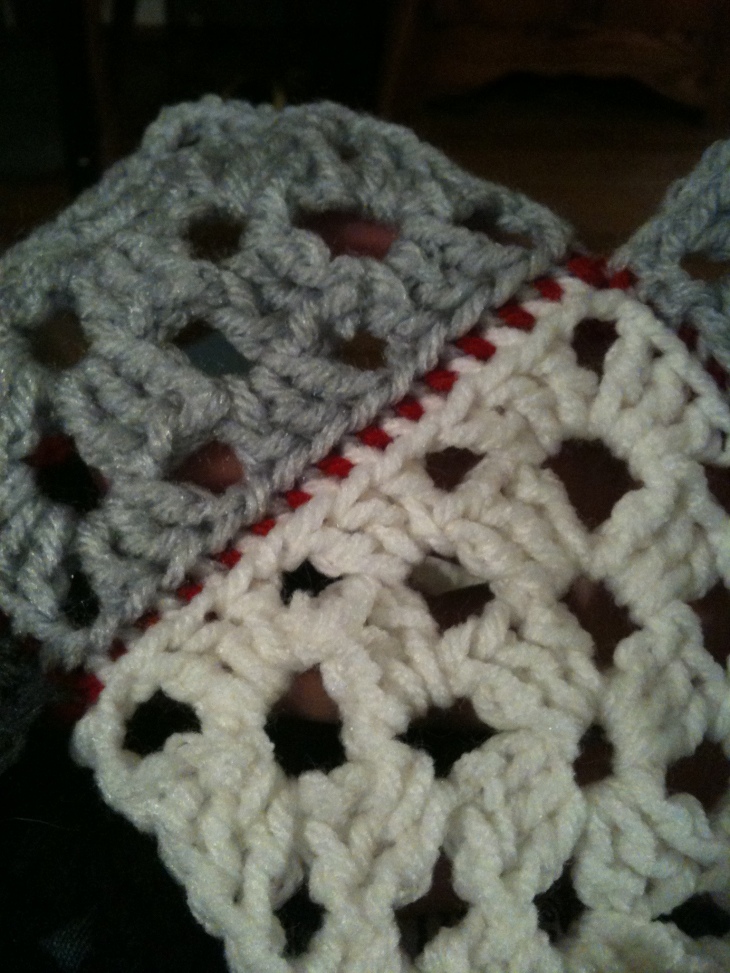 Note that the red is visible but not necessarily dramatically so (though I imagine it will be pretty damn striking even in this small way over the course of a whole afghan). But now check out how the seam looks on the back:

Wild, right? I’m so pleased. The back is going to be amazing. Which, when it comes to granny square afghans, is not something you can normally say.

I set a timer to wake me up every three hours. And I learned that, in my sleep cycle, the three hour mark has me deep, deep in some hard sleep. But I got up and got the dog out and we had a successful pee-in-the-bed-free night! But man, I feel like I’ve been hit by a truck. I have no idea how new parents do it.

A couple of the texts he sent me yesterday have me nervous that he’s not convinced that this is the right course of action.

But then, he didn’t wake up to find him and her sleeping in her piss two nights in a row. He didn’t have to clean up accidents during the day two days before that. And the way you can run your finger in the hollow spot between her back rib and whatever is supposed to be just under her rib is new, from yesterday. And he’s got to see for himself how she shakes when she breathes in, like it hurts her.

I’m glad, then, that I scheduled it for Thursday, even if it means a couple more nights of shitty sleep on both her and my part, because clearly, we turned a dreadful corner while he was gone and he needs to see that there’s no coming back from it.

But I really hate that for him. What I learned early Sunday morning, he’s got to learn first-hand today.

It’s a terrible business, waiting around for Death.