Sometimes your local alt.weekly will run a story about the Harpe brothers and the illustrations will be so amazing that you will track down the artist and ask her if you can buy prints. And she will say yes and you will be so damn happy. 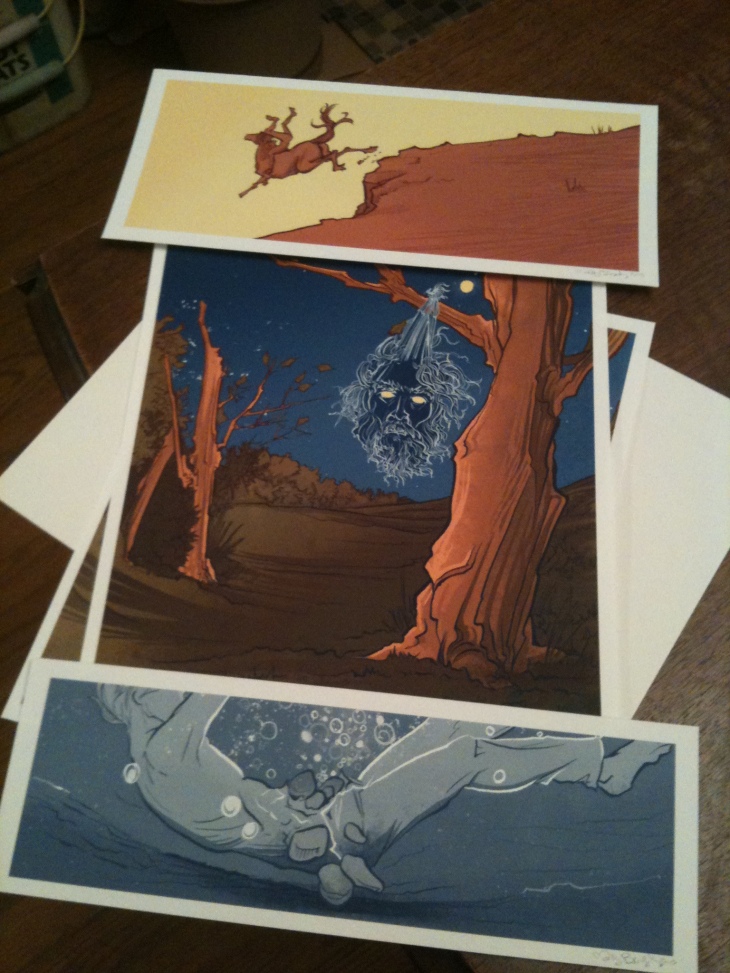 I have mixed feelings about The Civil Wars, but I like this song a lot. I think there’s something really nice about the way the song is put together geographically. You’ve got all the electric guitars loud, but sounding way far back. Then the acoustic guitar and the vocals are closer to you, and it sounds like there might be a tambourine in there at singer distance. But check out the weird moment right at 2:30, which may be why I love this song so much. Dude’s singing “I had me a girl/ like cigarette smoke/ she came and she went” which is very lovely imagery.

But right up close in the mix, like someone is knocking slowly and deliberately on a door right near you. It’s great. It’s like you hear this knocking, the temptation is there to open it, and yet, we both know, there’s only going to be emptiness behind that door.

The truth is that I don’t really enjoy cooking. I don’t hate it, but I find it to be kind of a chore. Which sucks, because I used to really enjoy cooking. But somewhere along the line, it just became a thing I do that I’m probably fucking up and that’s why I’m so fat and thus ruining America. You think you don’t internalize shit if you can recognize it and call it for the shit it is, but then you also find that things you once loves aren’t so fun any more because of that shit you didn’t realize you’d internalized, so there you are.

Anyway, I made a chicken pot pie last night. I don’t really like chicken. It tastes funny to me now that I’m on metformin and I just cannot stand any little bit of gristle. But, I don’t know, I’d never made a chicken pot pie before and the ingredients include “a ton of vegetables!!!” which seemed like a good thing and so I whooped one up. And it turned out amazing. Like stunningly amazing. It was kind of giving me the heebie jeebies it was so weirdly good.

Like how can such a delicious thing arise out of my ambiguous feelings about cooking and these simple ingredients? I didn’t even make the pie crust. I just used store-bought.

I don’t feel depressed. In fact, I feel better than I have in days. But I’m thinking a lot about death lately. This morning, on my walk, for instance, I was thinking about how the Butcher will be the one to divvy up all my shit because I don’t have any kids. And I was thinking about whether I could bequeath my stories about Nashville to the city of Nashville in hopes that some writer someday would come along and fix the shit I fucked up.

And I guess the thing that I keep thinking about mostly is that we’re here for such a short time–even if you get 90 years, it’s not very long at all–and we spend so much of it being such assholes in the name of “helping.” Like I’m going to completely fuck up your relationship to food and make you feel terrible about yourself because you’re fat and you will die!!!! As if some people aren’t going to. As if there’s any getting out of it.

Or let’s pick on poor people and pretend like they’re robbing us if they need foodstamps. It’s like a cruel joke. This idea that we need to micro-manage poor people in order to teach them personal responsibility so that they will… what? Not die? Having food staves off death. Having a little happiness–even if it comes in a two-liter of Mt. Dew–is the only fuck-you we can give to inevitable death.

But we’ll just ruin as much shit as we can for people and to what end? So that we all end up in the same ground with the same worm eating our innards.