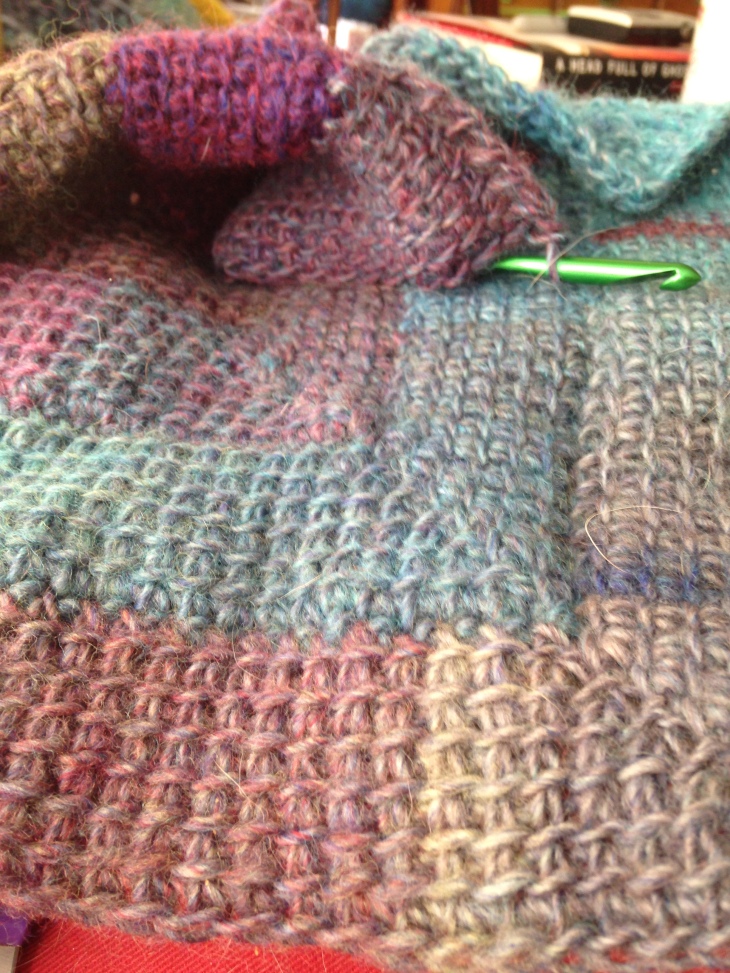 I love the texture of this so much. If I look too closely, I can still see how I kind of fucked up the early corners, but I think this stitch and this yarn is very forgiving of mistakes. It’s said to be a mixture of crocheting and knitting, but that’s only in technique, I think. This isn’t a texture I’m used to getting with either.

On the back, if you don’t look at it too carefully, I think it’s easy to mistake this for knitting. But it looks very different up close. Also, weirdly, this side is really soft. I think the puffy loops must be the reason.

I read William Gay’s Little Sister Death. It’s not a book I’d recommend to non-writers. It’s not a complete book. It’s not even a complete manuscript. Weirdly, there’s nothing in the book to let you know that it’s a partial, rough draft, so I’m sure if you buy the book thinking that you’re going to get Gay’s take on the Bell Witch, you’re going to be sorely disappointed.

It’s this incomplete draft and his essay on the Bell Witch which, I think, first appeared in the Oxford American.

If you are a writer, though, I highly, highly recommend this book. Who ever gets to see what a genius is like at this early stage in a book’s life? Here you see him toying with what characters might be important, what conceits he might want to employ–toward the middle of the book, the house itself starts to sleep and awake, but then it stops and I’d be so curious to know if he thought that was working (I did) or if he would have cut that from the final version–what kinds of imagery and symbolism might be important. It’s also fun to watch him clearly toying around with things that horror writers did that he liked. It’s amazing to see how strong and beautiful his prose already is, that early in the process.

I’m bummed we’re never going to get to see his final version.

I’m also bummed because his article on the Bell Witch is good and has a lot of information that would seem to be substantiatable. The Saturday Evening Post wrote a story about the Bell Witch in 1849. Betsy Bell sued them over it. Local papers regularly covered the story as it was happening and shortly after. I got into the archives of the Post. I couldn’t find a story in 1849. I ran a search through the Post through the whole 19th century. Nothing. I ran searches through all of Proquest’s historical newspapers. Nothing.

I could have missed things.

But I have to tell you, I think that story didn’t exist until Ingram’s book in the 1880s.