Y’all, I have to make three Third Man afghans. The one I’m almost done with? Let’s say “circumstances” and, yeah, the person’s not going to want it. So, it’s going to a poet. And I will be making an afghan with no yellow or black in it for the person who was going to get this.

This is a weird town where the circumstances of some genius you don’t know affects your evenings for the next month or so.

But I find some poetic justice in ending up making three Third Man blankets. 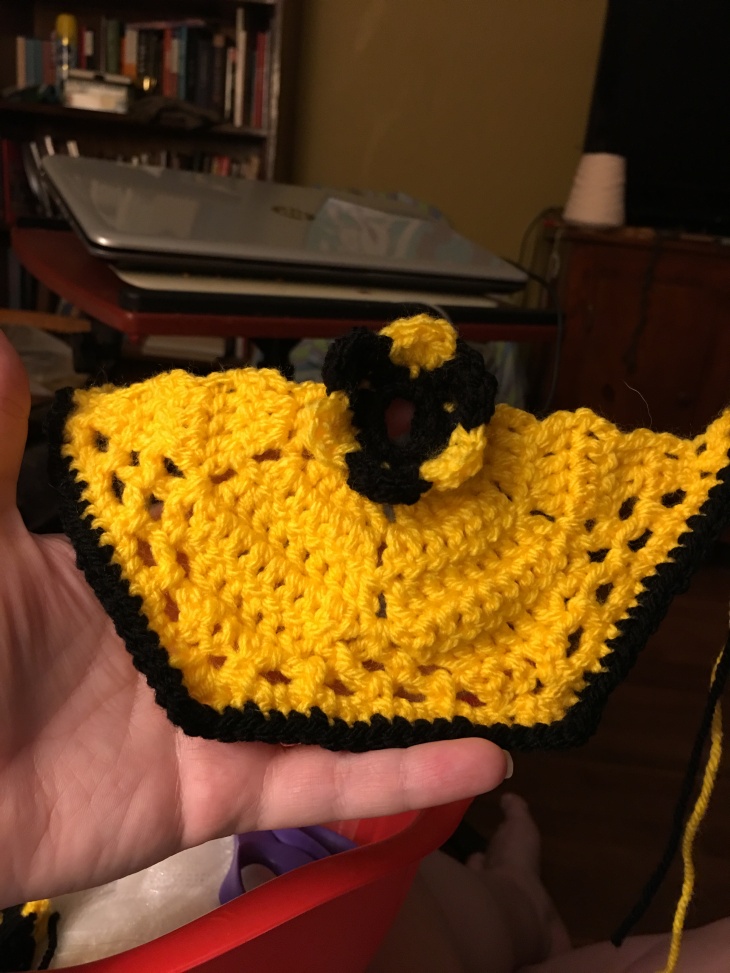 A thing I’m really enjoying, though, is that I’m trying all different kinds of things, different color changes, different techniques, because, if it’s too hard, I just do one of them.

I have a very, very important work meeting this morning. Then this afternoon I need to find my guts and call the vet about the orange cat. The Butcher came by to see him yesterday and he, of course, perked back up. But, sadly, not enough for me to be fooled.

I think part of my dread, if I’m being honest, is I’m afraid that the vet will say, “Well, we can do x and see if he improves” and x will involved me trying every day to shove a pill down his throat so that he and I can both come to hate each other and then he’s still going to die sooner rather than later, because he’s 18. But what kind of monster wouldn’t try shit to see if it helps? It feels cruel to say, no, I’d just rather kill him now.

And, my god, I don’t. I want him to just die peacefully in his sleep or die in a car accident where he’s the driver and we’re all left wondering how the hell that happened.

But I’m having a hard time figuring out how to know what medical interventions are “worth it” even if it makes him unhappy and what’s just saying “let’s be miserable together until we have no other option.”

He’s had a nice, full, long life. I don’t want him to suffer. So, I guess I’m hoping the vet will say something clear like “hey, we can give him this pill and all this will clear right up and he’ll be pissed at you about the pill, but he’ll get another five years easy,” in which case, hell yes. Or he’ll say “everything we can do is going to make him angry and afraid and won’t make him better. It’s just buying you a few more months, but they won’t be good months.” And then it’ll be clear.

But I’m afraid it’s going to be more nebulous, and I won’t know the right thing to do.

But, also, he’s outside right now, and I’m so relieved because it means he isn’t in here peeing on things without me realizing.