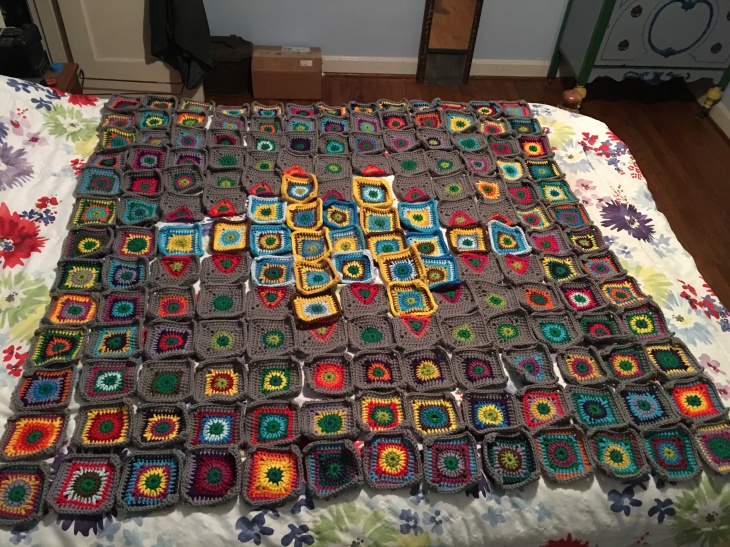 It’s not going to be done in time. Trying to cram an 8 week project into four was ambitious and, maybe, if I’d done nothing but work and crochet, I could have finished it, but what’s life without friends and dog walks and goofing around? It’s just going to take me another week to get it joined and bordered. I’m making my peace with it now.

I was worried it was going to be overly pink, because I used a ton of pink yarn because I had it left over from the peacock afghan. But I feel like it doesn’t at all look overwhelming here. I do wish I’d used a lighter gray for the background, but lesson learned. This is still nice.

Sonnyboy is having a terrible bout of diarrhea, which, ugh. I came home last night to a bunch, but he seemed okay otherwise. His appetite was fine so I fed him like normal.

But then, every hour or so, he wanted to go out.

Then I had to go to bed.

And I woke up at 4 in the morning to a noise that sounds funny when you’re a kid, but strikes terror when you’re an adult. I threw the dog back outside. I cleaned up a little. I went back to bed.

When we walked, he was definitely feeling like he had to poop, but everything had already cleared his system, so nothing but noises came of it.

When we got home, I grabbed my purse and went to Kroger. I came back with a shit-ton of paper towels, canned pumpkin, Pepto, and hot dogs. The dog has now had two big scoops of pumpkin and a mega dose of Pepto. He’s now sleeping more soundly than he has in a day.

Meanwhile, my boss’s bosses are coming to the office to spend the morning, so… so… I hope this works to clog the dog up, because I can’t be home with him.

I’m also pissed because the first bout came complete with corn–a lot of corn–and I have’t had anything with corn in it. And aside from the faint odor of poop, my house also smells kind of spicy, which, again, is not something I have eaten at home lately.

And yet, I can’t for the life of me figure out where he’d have picked up something spicy and corn-filled. It sounds yummy, but still! Please don’t feed my dog, neighbors.

Anyway, please keep your fingers crossed for my household today.